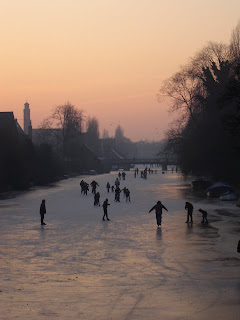 Fred took this picture from a bridge. He likes the woman (he's assuming it's a woman) in the middle with her arms spread out because it looks like someone just learning to skate. It's a total postcard picture, isn't it?

When I mentioned to Fred this morning that I wanted to go for a walk on the ice on the canal, Fred said, "I'd walk there with you."

"What about walking on the ice?" I asked.

"I've never really seen the sense in walking on the ice," he said.

What I said next isn't important. But rest assured that whatever it was, I was making fun of him and using a funny voice.

I called our friend, Alastair, who had expressed interest in walking on the canal, the "natural ice" as it were. So we made a coffee date out of it - in our neighborhood. It seems that the canals in the center don't really get frozen over because they're constantly being flushed out, the water circulated so that it maintains some degree of "not disgusting."

However, Fred heard that they were going to quit circulating the water in the canals so they can have a race. Alastair filled in the story a bit more and told us that it would be the Keizersgracht. But this cold snap is supposedly only going to last until Tuesday, so they started the project a little too late. Proper planning prevents poor performance, people. 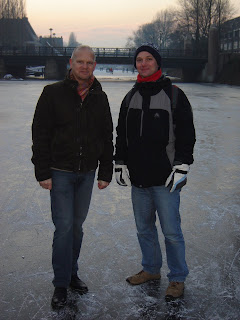 As I mentioned in yesterday's post, after being inspired by Doris' story, I went for a walk on the canal - even "recruiting" two others. (Not a difficult task with these two.) Here's Fred and Alastair standing in the middle of a canal, not something you can do every day. Doris mentioned walking for a while on the canal. I could have done it. It wasn't scary at all. I didn't jump around or anything, but three full grown men (the three of us) were standing on a piece of ice about a meter square and it was completely fine. "No creaking," in the words of Alastair. Under the bridges is, for some reason, not frozen. Seems to me that under the bridges would be a great place for ice to form. There's no sun and it's cold - what else do you need? Anyway, that would have prevented us from completing the trip, but not the actual ice. It's thick and sturdy for huge stretches. 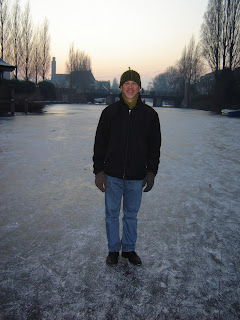 And here I am. Alone on the ice - although I wouldn't have been for long. As Doris mentioned, it was okay with other people. Being out there alone would have freaked me out a bit. In fact, at the end, I was trying to take a picture of the bubbles in the ice because you could see how thick the ice was. It was a good five or six inches thick. Suddenly, I looked up and they were on the ground again. I remained composed, but I rushed to get off the ice - as if it were going to magically start falling to pieces like I was in a Harry Potter movie or something. A part of my brain is still around eleven-years-old and is easily spooked. 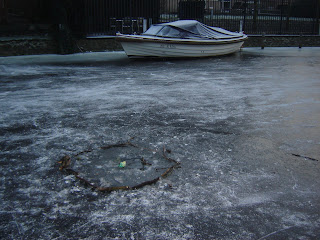 This was not a very comforting sight. It was a little hole. Someone probably drilled or dug it to see how thick the ice is. But I didn't like the looks of it.

And that was my adventure on the ice. It was a very nice experience. I probably wouldn't have done it if Doris had not suggested it - and had I not had company. So thanks to Doris, Fred and Alastair. And thanks to this cold snap. I'm getting a lot of material out of it.
Posted by Andy Baker at 6:48 PM

That first one looks like a Victorian postcard.
They've been predicting a break in the weather for a few days here now, but it hasn't happened yet. Today was one of the coldest so far, staying below freezing all day. You don't see anyone on the ice here though!

I admit I feel very happy and a bit proud to have inspired you to walk over frozen water. The pictures are beautiful, your account did make me feel a bit "home"sick. Just to be If you haven't done so already, check Alexandras (http://undersutchskies.com) latest entry about skating. For the first time in 8 years, I have been ice-skating today. My 6 year old nephew called and asked me to go skating with him. I was nervous (since I also had to look after him), but we had such a great afternoon and it was so much fun. So, yes, sometimes it's necessary to step out of your comfort-zone, but so worth it. At least I should to do it more often.