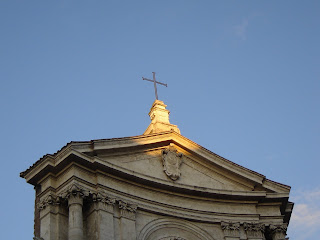 This evening, in an effort to keep up with our movie viewing, Fred and I went to see Religulous. It's a Bill Maher movie about religion. His premise is that he "doesn't know the answer," so he "doubts." But he is pretty fierce in flat out saying that religion is ruining the world. There's not a whole lot playing here at the moment - and I'd heard some good things about this one - so we went to see it.

Before the movie started, I turned to Fred and said, "This is going to be like a Michael Moore film." This meant (and he understood me completely) that any pretense of objectivity was balony. Still, he's smart and has an entertaining style, so I figured it would be a pleasant enough time.

He spends a lot of time attacking fundmaentalist Christians in the US. Then, he spends a moment on Scientology, and a few minutes on Mormonism. (Maher even spoke to an ex-gay guy who Fred and I agreed looked totally gay.) He takes some swipes at Judaism and then, after talking to a guy who runs a "canibus church" in Amsterdam, uses our fair city as a launching pad to look at Islam for a few minutes.

I was wondering if he was going to attack the Muslims like he'd attacked the others - or if he was going to chicken out. He was negative (of course) but his treatment was not as mean spirited as it was towards the American fundamentalists. But to tell the truth, the Muslims may have their problems, but they aren't as "colorful" as the American fundamentalists.

It reminded me of a program I'd heard on This American Life called Heretics. It's really good - and totally free to listen to. Listen to it if you haven't. A very non-fundamentalist way of looking at religion and God. A whole new take on Christianity.

Towards the end, I thought, Just end already! I thought that it would be much better if they'd just lop off about a half hour. Then Fred told me the time and I realized that it was just over an hour an a half long. Woops. It just seemed long.

After the movie, we went to The Taco Shop. It was on the way home and we like it. It's been around since 1992 and it's probably the best Mexican (fast) food in Amsterdam. It's run by an American guy who (I think) opened it with his father. There's another one in Copenhagen. He's always got some young Dutch guy in there helping him out. It's dependable. We've eaten there and taken out. Either one is great. I recommend.

I like a movie about religion. It's a fascinating subject to me. It's been such a constant in my life and such a constant struggle in terms of people telling me about it. It's one of those things that I like hearing people talk about. People are so sure about what they believe. I'm much less fanatical about my beliefs. I believe what I believe, but I don't scream about it. I'm not sure you're really supposed to. Is that really what Jesus would want?

P.S. Catch this movie on DVD or cable, but I wouldn't really go out and spend real money - unless you just need to get out of the house.
Posted by Andy Baker at 8:30 PM

I'm writing a discourse analysis on born-again christianity, about conversion experiences in particular. It's like a thesis, actually. This means that I am examining conversion stories, using certain criteria. I try to answer how a certain us/them reality is constructed (you're either saved or lost) and how people need to have led (self-defined) "bad and sinful" lives in order to be able to feel the (imagined?) self-transformation of conversion. After all, there would be no need for a rebirth otherwise. So thanks for this interesting post. No new messages on your bike lately?...
Doris

Actually, Jeebus stated quite emphatically in the book of Matthew that one should not scream about their faith. At least not if attaining Heaven was their goal. Funny how evangelicals manage to "forget" that.

If you haven't already run into Bart Ehrman's writings, I think you would enjoy them. Just do a google on him and you'll find out all you need to know before you invest time in reading his books. He has certainly colored the way I look at Christianity.

I've been reading and enjoying your blog for several weeks now. Decided it was kind of creepy to just read and never comment:-)