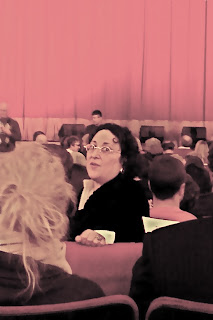 One of the podcasts I love the most is This American Life, which I believe I've pimped here before. It's a collection of stories and essays and clips on a different subject each week. If you haven't given it a listen, I strongly suggest it. You can get it through iTunes or on their website. It's fabulous and about an hour long. 'Nuff said.

Recently, I was pointed towards a similar podcast called Radiolab by a knitting friend. She thought I that I might like it - and she was right. It's the same format. They take a subject and they explore it and talk about it. The blurb on their website says, "Radiolab is a show about curiosity. Each episode is an investigation - a patchwork of people, sounds, stories all centered around one big idea."

I think the last one is called Diagnosis. And there was one recently on memory and forgetting - really interesting. And then one on Morality and then one on Mortality. The mortality one is all about dying - or not. Apparently there's a lot of people out there trying to slow things down or lengthen the amount of time we get. I can sort of see doing that. Living is a lot of fun if you do it right.

Robert Krulwich is really into science and has another show (a short one) called Hmmmm... on NPR that's all about science. The other host is Jad Abumrad. They have a banter that sometimes sounds to me a little...practiced, but it's a fun show and it's always a good listen.

They also did a show on Race that is sort of mind blowing. Apparently there's a test you can take (a home kit - you swab the inside of your mouth and send it in) and they can tell you about your racial make up. And there's one on Sperm. It's fascinating. See? Listening to podcasts is about learning.

I took this picture in Cincinnati the Saturday after Thanksgiving. And then I cropped it and played with it a bit. The woman has such a look.
Posted by Andy Baker at 3:06 PM