The Tree Comes Tumbling Down 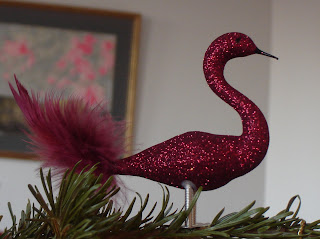 No, our tree didn't fall down. It's just time to start taking it down. Since it's getting really dry, it's become sort of a fire hazard. This is one of the new ornaments Fred bought for the tree this year. There are two red and two gold. They clip on. He was slightly concerned about some spots that didn't have anything in them. They're a nice addition. Not gay at all.

Encouraged by a student of mine, I have started writing down my dreams - in the middle of the night. Of course as I'm writing, I think I'm writing legibly, but in the morning it looks like some notes I took in graduate school. (I had a little sleep deprivation problem at the time.)

This morning I woke up and remembered that I had written something down, but I had no idea what it was. When I read it, I said, "Oh yeah..."

I was burning trash in the spare room and a little while later, I realized that I had left the fire burning unattended. When I tried to get in the room, the door was locked and I could hear water gushing from a sprinkler system. I tried to ram the door open with my shoulder, but it was like hitting two pillows together. Strangely, I wasn't so much concerned about almost burning down our building, but that our downstairs neighbors would be angry with me because of the water damage. I woke up with that paralyzed fuzzy nightmare feeling and thinking, "Oh good. It was a dream." And I would have forgotten that if I hadn't written it down. (What a tragedy that would have been!)

The point of this whole exercise is to start noticing "unreal" things in my dreams, such as: 1) I wouldn't really burn trash in the spare room. 2) There's no lock on that door. 3) There's no sprinkler system in our apartment. 4) My shoulder is slightly firmer than a pillow - as is the door.

On New Years Even night I had about ten little bits including: "Bulldogs?" "Rob Hunter" "universal health care discussion" and "a lot of beef when I ordered yarn." All unrelated. It made for a fitful night of sleep.

This is what I'm doing to put off dismantling that tree.
Posted by Andy Baker at 4:08 PM

Inever remember my dreams, but I probably would if I wrote them down in the night. The question is, where do you get the determination to wake up enough to grab pen and paper?! I'm awed.

And I'm jealous of your pretty/sparkly/feathery clip-on birds! They are awesome. I love bird decorations!

I did the whole dream jotting thing but what I read in the mornings freaked me too much...some things are better forgotten!!

Mars Bars chasing me down the street indeed!