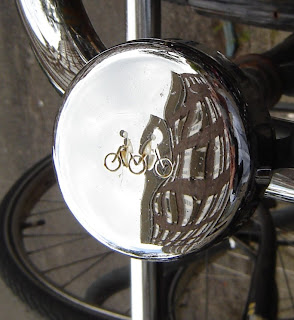 Last night on my way to church for choir rehearsal, I stopped at a stop light, and I sat patiently as I waited for the light to change from red to green. Meanwhile, five fellow cyclists rode through the light, two without any pretense of slowing down.

A few minutes later, I was stopped at another light. Again, bikes drove through the light and into the night. I don't particularly care about other cyclists riding through lights. I'm just setting up a story here so that I can make a point. There are some lights I'll ride through and some I won't. There are times of day I'll do it and times of day I won't. And last night I was trying to ride at a speed that would keep me from breaking a sweat, so the stops helped me in meeting my goal.

Full disclosure - getting a ticket for running a red light a few years ago made me more aware of lights, so I'm more apt to stop. It hasn't cured me, but it's made me look around before doing it - and it's made me more choosy.

Then, as I was riding down Vijzelstraat right near the Reguliersdwarsstraat right by the Munt Tower (not important unless you live here), a bike cop stepped out in front of me and asked me to pull over. It didn't occur to me until I was stopped, but I was riding without my lights on. They've been stopping people for a while now - a safety thing, don't you know. The guy - a young blonde fellow - said that he had to give me a ticket whether or not the light on my bike worked or not. The light wasn't on, so I get a ticket - full stop.

I didn't argue. I was guilty and he was throwing my schedule off. I just wanted the whole situation to hurry up and be over. However, as I was standing there watching him write up my ticket (which took about five minutes) no less than twenty-five bikes went by in every direction without lights on. It's completely random. There's no point to the whole thing.

It's crazy to me that I stopped at two lights last night and that I always (except last night) ride with my lights on and the one time that I didn't have my lights on, I got a ticket.

Towards the end of our interaction, he said, "Why were you riding without lights?" Dumb question. Terrible question. Ridiculous question. And I can think of about ten snappy come backs. Which did I use? "I forgot to turn them on." Not snappy, but I was in a hurry. But I did mention to him that he'd picked a great spot and that he was probably going to be very busy that evening. He said, "I know!" Yes, he was smiling.

The upside is that the ticket was just €20 as opposed to the €60 fine a woman I know recently got for running a light. So it's just a slap on the hand as opposed to a bite that actually drew some blood.

As I mounted my steed to continue my journey, a fellow rode by on a bike while carrying a second bike on his shoulder. (Don't ask me to do that.) Both bikes had the lights on. Sweet.
Posted by Andy Baker at 4:40 PM

I wondered if your brush with the long arm of the law would get a mention here...

It does seem incredibly random whether you get a ticket or not. Most of the time the police don't care whether you have lights or stop at red lights, but then suddenly there's a crew of them hiding round a corner fining things that were OK yesterday. I guess they get to keep the fines or something.