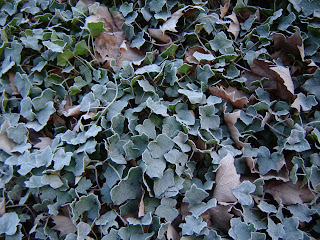 The cold snap is over, so now it's just cold as opposed to actually freezing cold. I noticed that I was sweating from my wool hat today and that the canals where people were skating are in the process of thawing. I guess I'd better throw up some frosty pictures before it's completely over. Sometimes this cold isn't so bad. When it's not windy, it's actually nice to be out in it. My friend, Dorothy, with whom I ride home from choir practice on Tuesday nights, comments that even really cold evenings are "heerlijk" and that it is a "mooie avond." 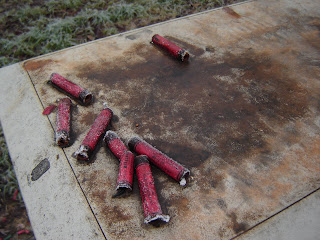 These are some snaps I took the other day when I was on my way to a class. It's some fire crackers left over from New Years Even and the dusty little bits of snow even covered the spider webs, keeping the web sort of intact - but not really ready for use. I think the owner will probably end up rebuilding. 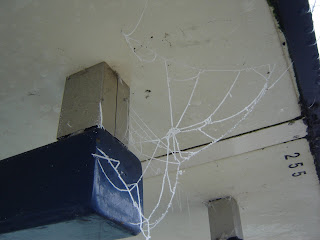 Speaking of chilly, I've been watching Mad Men. It's really good. I don't love watching it with the computer on my knees, but I do love having it at my disposal. And it's a good show for knitting. This is the plot: drink, smoke, have an affair, repeat. The main character, smoking...I mean Don Draper, is a good looking, successful fellow who is just miserable. I'll watch it right to the end without stopping. I think I'll finish Season One after choir tonight. But I'll need another series when this is over.

I've already seen the following in their entirety:
I'm open to any suggestions. How is Curb Your Enthusiasm?
Posted by Andy Baker at 4:06 PM

I have been watching a bit of Brothers and Sisters via the satellite. It's very soap opera-y. The internet raves about The Wire, but I haven't seen any of it.

I got a dvd player a couple of years ago at the Aldi (so, like, it's nothing special) and it has a usb input on it. This means you can copy avi files, jpegs, mp3s from your computer onto a memory stick and then the dvd player will play it on the tv. It's great!

The only suggestion I have is 'OZ'..I must invest in the boxsets. 'Ally McBeal' was good in its day..if only for the very lovely Robert Downey Jnr.

I like "Brothers ans Sisters" quite a lot, I watched it when it aired on Austrian TV. Very different, but also one of my favourites is "Californication" with David Duchovny. The show is said to be influenced by the writings of Charles Bukowski, so you get the idea... And I don't suppose you'll share my love for the "Gilmore Girls" or "Men in Trees"!? ;-)

Californication was good and I'm waiting for the second season rather avidly. If you want to borrow the first season let me know. We just bought Big Love which is an HBO series - really good. Shameless is British and good, but I think some of it is topical. I just got Supernatural and have been watching Eli Stone on Net5 - have you seen it? It's on Mondays.

Nice photos!
I watched a few "Curb Your Enthusiasm" and hated it. I just never thought it was funny and didn't get the point. Ugh.
Big Love was entertaining. It was actually on tv here (RTL5? Net5?) for a short while.