In the future, Gentle Readers, please focus on what I'm writing about and don't jump to the next day's post subject. I wasn't there yet! Thank you. And hey! But thanks for dropping by! 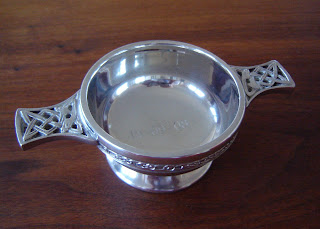 My friend, Alastair gave us a quaich [pronounced quaich] as a wedding gift. He even had it engraved with the date of our wedding (notice the quaint European format of the date). 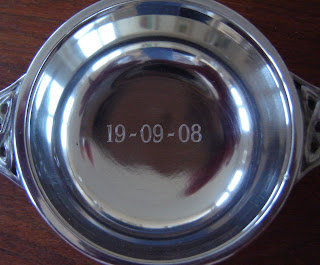 The lid of the box it came in (which is now being used to hold binder clips, a staple remover and an assortment of rubber bands) states the following:

The Highland Quaich
Traditionally the "Quaich", which originated in the Scottish highlands was used both for "Cup of Welcome" and also when offering a farewell drink. The Quaich was originally made from the primitive "staved" wood, then later from horn or leather, eventually pewter and silver becoming popular as it became the favorite drinking cup throughout Scotland. Being derived from the Gaelic word "cuach" meaning "shallow cup" the distinctive design has remained unchanged over the centuries - a shallow drinking bowl with 2 handles colloquially known as "lugs".
Speaking of lugs, Fred has moved the quaich several times during it's time in the apartment. I think the clean, solid design appeals to him. I like it because it's sort of just useless and pretty, and there's an exotic quality to it since it came from Scotland - like Alastair (on both counts). See yesterday's post for a little perspective on how big it is. It's a nice size for what it is, but it wouldn't be very useful as a drinking vessel. I've only used it for my morning coffee when every other cup is dirty.

Alastair said that the quaich has become his gift of choice for gay couples when they get married. I really like that idea. I like engraved stuff. And it's one of those things we'll keep around. Thanks again, Alastair!
Posted by Andy Baker at 12:31 PM

I think you'll find that it's the perfect size for drinking scotch. Unless, of course, you're the sort who swills it from the bottle.

Having read your blog for some time and noticed comments from Alistair I suspected the quaich may have been a gift from the very same. (Miss Marple, eh?)
Despite being Scottish I do not like whisky..I'd fill my quaich with Irn Bru (but fear it may tarnish the silver).
Very cool gift

Oh you big softy, Andy! I don't know what to say now. I'm glad you like it.