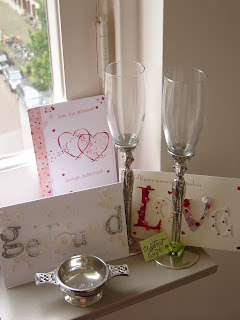 What do you get for the gays in your life when they get married (or have a holy union ceremony)? A lot of wedding-related stuff is really hetero. While that's not surprising, you'd think that there would be something that wasn't so blatantly "his and hers." I think there's a huge gap in the market for tasteful gay wedding stuff. There's a lot of crap, but not a lot of really good stuff.

Fred and I got married four months ago (and what bliss it's been!) and we received some rather thoughtful and original gifts. So I thought I'd take a couple of posts and show them off. 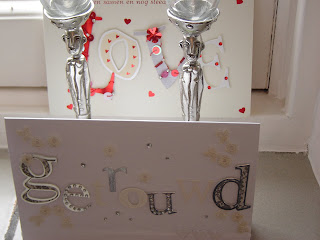 Item number one on the list was a couple of champagne flutes from our friends Patty and Bill. They live in Ohio in the suburbs and they were still able to find something very nice. Okay, I'm probably giving Bill a little too much credit. It was Patty and her daughter, Grace, who did the shopping. The story, as it was told to me, was that Patty and Grace were in a cool shop looking around and Patty asked the sales girls if they had something for a..."same sex union ceremony." (Is that the word she used? It struck me at the time that she didn't say "wedding.")

So the girls looked at each other and then one of them had a little light bulb go off over her head and she returned with the the champagne flutes saying, "We can break the sets." (The symbolism of that statement is thick.) After Grace approved - she is four and knows all about these things - they wrapped them up and Patty brought them with her to the wedding. They're a really nice item. They're totally Fred: clean, sleek, understated.

Patty also gave us another little something that is now gracing our wall, but I'll save that for another post. I have to say that when Fred likes something enough to keep it in plain sight, you've done well. He's not one to just keep something on display because it was a gift. Sentimental he's not, but he's got good taste. I'm much more sentimental. Not psycho-sentimental, but I'm prone to saving stuff. And I like having them around because it reminds me of her and all the thought she put into buying them.

Today is Patty's birthday. What would I do without Patty?

Once again..great photos. Very elegant flutes and nice to see you also got a quaich. I am humbug to your wedded bliss :). Only joking..continued happiness to you both.

Nice quaich. My aunt got an engraved one for David and myself as a wedding gift. I've got a 15 year single malt that we'll be drinking from it on our first anniversary.

Aaaah! You got me again. I totally did not see this coming. And what would I do without you, my best, matching tie-wearing, cuter than words, prom and choir banquet date?

These are all such great and thoughtful gifts! I laughed at your comment about the wedding day gift exchange, I recently mentioned that to my fiance and he refused to believe "it is a thing.I seriously just love your necklace in those bridal photos. you make me wish i had worn one. it is perfect!!!! Wedding Gifts

Very interesting blog and so wonderful. It would be great if you can provide more details about it. Thanks you.
Return Gifts | Best Wedding Return Gifts

I actually enjoyed reading through this posting. Keep it up
Wedding Return Gifts | Return Gifts

Thanks for sharing this nice information here. it's really informative for me.