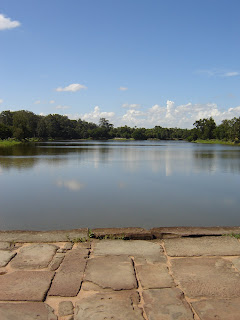 Going to work the other day, I got this song stuck in my head. I heard it first when we saw The Darjeeling Limited. I really enjoyed that movie. I liked the colors and the music and the pace. I think I bought the DVD.

At one point, the three brothers were on a train. They had two little compartments that were painted with bright colors and had lots of interesting stuff all around. The train rocked and the three of them just sat and had deep conversations about their lives and their relationships. It was total fodder for my romantic fantasy of traveling through Asia on a train.

So I was really happy when Fred told me that we'd gotten ticket on a train from Bangkok to Chang Mai, Thailand last August. We got a compartment and ordered meals, and there were bunk beds like in the movies, as well as a conductor that barely spoke English. But it was completely different than the train in The Darjeeling Limited. Everything was gray, the food was just this side of edible and we killed no less than eight roaches in the first hour. (Fred vowed not to sleep the whole night.) I loved it. It was so laughably awful that it was an incredible experience that I love having had.

But anyway, the song comes in my head and I immediately start thinking about The Prime of Miss Jean Brody. She's a school teacher at a boarding school in Edinburgh, Scotland. It made me realize that my job would be sort of perfect if it had a sound track and the students acted more like students in a boarding school in 1930's.

If you think that riding to a really old building on a bike to go to work is completely cool, you're right. If it's not your thing, it's not your thing. I need to get a picture of me on my bike in front of the school so I can look back at it in thirty years and see what it feels like to look at it. I love looking at pictures like that. Takes me back.

The picture above was taken at Angkor Wat last August. It was a very hot day.
Posted by Andy Baker at 6:06 PM