What the Right Hand Doesn't Know 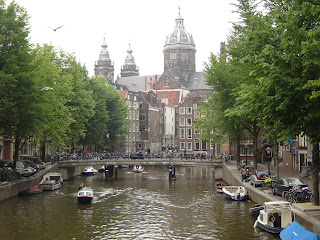 The Dutch government has been getting stricter with its imburgering, or integration, program. I had to go through the integration program when I arrived five years ago. When I was doing it, I talked to a couple of people who had been here much longer who had not done it. They didn't fall into the right category (i.e. they didn't have a Dutch partner), so they were excused or something. That's sort of like the rule that says you can drive with your American drivers license if you're here temporarily (like five years), but if you are here permanently, you have to take the Dutch driving test. I understand the idea, but it doesn't really make sense if you back away from it and get a little perspective.

I know two people at church who've been here for over 25 years. (Have I told this story before? It feels like it, but I have an update.) They're both Americans. One is married to a Dutch guy and one is single. If anyone is integrated, they are. However, they both got letters inviting them to come for their integration interview and sign up for an integration course at their own expense - like €80, or so.

The Dutch, being a very fair people, have to have everyone do the integration course. Of course the rule is aimed at people who moved here 25 years ago and have never bothered to learn the language or blend into the culture. (I'm not sayin' who, but if you're reading this, it's not you.) But if they want one group to do it, they have to make everyone do it. I get it. It's fair. I like fair.

I received my letter on Saturday. I have to report to an office in our neighborhood at 10:00 next Monday. It's completely ridiculous because, as I stated above, I completely my integration course years ago. Fortunately, I have the documentation filed away neatly and all I have to do is pop the file in my man purse and head out. However, it just smacks of that old saying, "The right hand doesn't know what the left hand is doing."

If your job is to send out letters to all the recent (and not so recent) immigrants, wouldn't it save time (and postage) to have a list of people who've already completely the course? The answer is yes. So I have to take time out of my morning (before work) next Monday and show up to hand someone my documentation that they should already have.

And it's not like they don't have access to this information. I went to the city hall a couple of weeks ago and the woman printed out a paper that had everything on it: the date I arrived in Amsterdam, our wedding date, my address, my parent's names, etc. They know everything, so it stands to reason that they should know that I've done their silly course.

Fred took the letter to work this morning with the promise of calling and asking why the didn't already know this and couldn't they get their act together and not waste my time because I have a job to go to! Of course he won't say it like that. He's Dutch and he's very polite.
Posted by Andy Baker at 5:59 PM