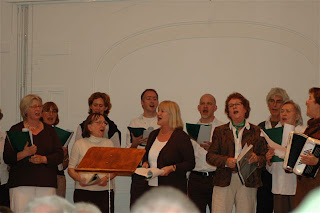 My afternoon was filled with singing. I was substituting in the choir of a friend of mine who I know from my regular choir. It was an interesting afternoon in a nearby community center. It was a sort of jamboree. We sang in several languages, among them German, Italian, Spanish, Armenian, which always amazes me. And then we sang a couple of American standards like Kiss Me Once and Kiss Me Twice (and Kiss Me Once Again). It was fun.

The people are really nice. They're a close-knit group. The other tenor (pictured below) showed me a program from when he sang in the choir in 1999. That's quite a number of years. On the other end of the spectrum, the choir recently got four new members from another choir that finally stopped because so many people had quit. I was sitting with the new folks, chatting while they were filling out their membership applications. Each one of the "new" people were in their early seventies. They're just a few years younger than my parents.

I love the idea of retiring and having more time to do things that I enjoy. Of course I keep busy as it is, so I can't imagine what I would do with more time. (Let's find out!) But I really love the thought of getting older and continuing to be active, like the vast majority of this choir. 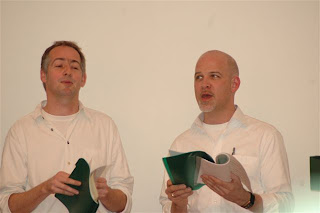 This guy here is totally Dutch. I'm a reasonably tall person at 6'1". He makes me look short. Dutch people are like that - except Fred. I feel tall around him.

That first picture is the last song we sang - Geef Mij Maar Amsterdam. The last line is:

It means "I'd prefer Amsterdam with no money than Paris with a million bucks. Give me Amsterdam." I sang it, but I hope that wasn't legally binding.
Posted by Andy Baker at 9:34 PM