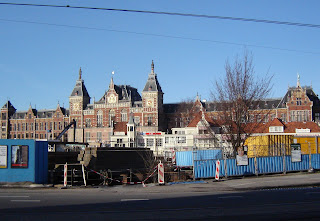 This is a photo of Amsterdam Central Station. All that stuff in front of it is construction. There is a ton of construction happening all over Amsterdam and it looks a lot like this all over the place. It's tiring to look at it all the time - and it's going to be around for a while.

There's a North-South subway line going in (maybe) that was scheduled to be over sometime this year. Then the finishing date was extended. Then it was extended again. It's fraught with troubles. There's a street (Nieuwe Vijzelstraat?) That is a mess because something happened during the construction and some of the houses started (slowly) falling in. The ground here is strange. I'll try to get the whole story and summarize it some time. It's sort of interesting.

Today was the first day that I've been out and it really felt like the city was coming alive again. It was a crisp day with lots of sunshine. That gets everybody's blood flowing. Fred said, "Let's get the vacuuming and cleaning done. I want to go out." And I didn't argue at all. (Did I mention that Saturday is housecleaning day?)

One of the things we did when we were riding around, was to go to a large store and look at televisions and stereos. I was so overwhelmed that I don't know where to begin. I just looked at a wall of televisions and said, "Why are there eight of one brand to choose from? There aren't eight sizes." Some are the same size. And then there are eight different brands. What is that about? There were so many to choose from.

In my life, I've had four televisions that were mine. I had a black and white that was a hand-me-down from one of my siblings and was free. I was totally fine with that and I had, of course, no cable and no VCR. Just an antenna that I had to move around in the right direction. (The things kids are going to miss out on.) That was around 1988.

My second television was a large monstrosity that was always snowy and had not one, but three shadow images of everything. No one but me could stand watching it or see what was going on. I was used to its messed up screen. Once I went to a friend's apartment and watched his TV and I was amazed how clear the image was. I hadn't seen a decent television in months. I couldn't get over it. That TV finally quit working and I went without television for a couple of years. That was the early Nineties. I missed a lot of good shows, but I didn't know it at the time.

Then I had a little free, black and white that a colleague gave me on the promise that I would give it to a needy person when got a good television. (I did.) Then I finally bought a really great new color TV with remote for $75 from a friend of a friend (fell off the back of a truck or something.) And I had free cable in NYC (I gave the superintendent $20 and...surprise!)

My point is that looking at televisions in a store is way out of my comfort range. Fred and I both know that the salesman is going to ask us what it is we want in a TV. What kind of TV watching to we do? We watch the news, movies and regular TV shows. We want one that's a little bigger than the one that we have and that will last for many years. So why do we have to pick from so many. Give me a choice of three.

We are also going to be in the market for stereo because ours is shot. Fred wanted to look into having it repaired. It's twelve years old. I said, "Seriously? Repaired?"

While we were looking at stereos in the store, he said, "This is the same as what we have. I think the only thing they've changed is the price."

"You are precious," I said.

I have the night alone because Fred is off at a Dutch cabaret with a friend. That is so not my thing. I don't need an intense Dutch immersion experience tonight. I need to knit and watch a movie.
Posted by Andy Baker at 8:16 PM

There was one time in my life that I went without a TV and I had small children. I am still amazed that I did it. We actually had a TV that we kept on a rolling cart in the front closet. It got pulled out when the Oklahoma City bombing happened (1995?) and just kept getting bigger. I can't imagine not having a TV.I'm pathetic that way.

Want To Boost Your ClickBank Commissions And Traffic?