Health Care is a Right? 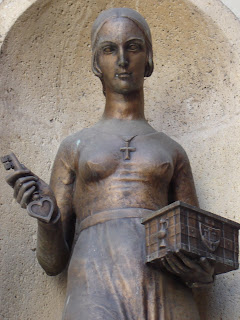 The idea behind this photo was that the statue looked vaguely like a nurse. I think she's a saint, but I'm out of my element in that arena. One of us took it in Croatia.

I believe I've said before that when I was an art therapist in NYC, I had the most fabulous health care I've ever had. I was in a union: 1199SEIU. Every month I paid $75 in union dues, which afforded me some wonderful benefits, one of which was amazing health care. I figured out how to use it a couple of years after I got it and then I went to the doctor any time I felt like it. Dermatologist, chiropractor, general practitioner, eye doctor - I went regularly and I really liked it.

I also had prescription coverage. One time I walked out of the pharmacy carrying over $500 in medications (pills and creams from prescriptions that I'd mostly gotten from the dermatologist) and I had paid...nothing. Love that. I was in my mid-thirties and I lived in a very busy city knowing that if anything every happened to me, I'd be fine. Someone would pay for it.

When I took the buy-out and left that job, I got six months of health care coverage, but after that, I was on my own. I applied for COBRA insurance just to see if I could keep what I had because I loved it so much. They wanted me to pay $350 a month! I opted for the plan that I'd had for the three or four years before I'd gotten the art therapy job: fingers crossed.

At that point, I was in my late thirties and I had some sense of what could happen to a person if he got sick or hurt. It gets expensive really quickly. When I had health insurance things would pop up here and there and I would make an appointment and show it to my doctor. Once time there was a strange click in my foot and I just needed someone to look at it and tell me to forget about it. I hated not having health insurance. I felt totally exposed. Like, watch your step.

When I moved here, I had traveler's insurance from the ANWB. It was two-euro a day and was really only good if something really big happened. It was...less-than-ideal, but Fred insisted I get it because if something did happen and I wasn't insured, he would be responsible for taking care the bills. When I was officially here and I got a job, I got health insurance and now I pay €95-ish a month and I'm covered. And when I didn't use it for a year (this happened twice), I got a little kick back - a little "Thanks for not using your insurance. Here's some of it back." Not an incentive to not use it, but a nice perk.

I've been listening to some radio programs that talk about the possiblity of health care reform in the US if Obama gets his way. The insurance situation there is really ridiculous. There has to be a way that it can cost less. Private insurance for a healthy singel guy in his mid-thirties that's $350 (and that was with a fairly large deductable) is too much. And if you have a pre-existing condition, you're totally screwed. My insurance here is not tied to my job, and I have a choice of who I want to go to. Also, I don't think they can charge you more if you have a pre-existing condition. It's sort of what insurance ought to be.

Fred remembers the days when insurance was even cheaper. He thinks what we pay is too high. I'm perfectly fine paying what I pay. It still feels cheap.

The doctors here are ridiculous, but that's another post. I've heard nutty stories.

When you think about the US health care system, just know that it could be probably done in a better way.

By the way, on the subject of really complex things, there's the economy and all that goes with it. Planet Money is a podcast I've been listenign to that is always good. It's on NPR. They talk about the economy in a way that is totally understandable. Their explanation of Berni Maddoff and his Ponsi scheme was really good and I totally got it. I should do a list of Best Bets. That would be on the list. Learning can be fun!
Posted by Andy Baker at 7:49 PM

I agree, health care should not be so expensive!! I'm Canadian, but even our health care could use a lot of work.

i haven't had health insurance since the late 80's and its down right petrifying and Obama's plan doesn't look like it will help me either, My hub and I are in our mid to late 50's and couldn't afford the premiums with a prayer!!! It took me 4 years after I moved here to find a doctor that would even take me without insurance and had to have a nervous breakdown for my daughter to convince him to see me. Thank goodness he has been very kind in the 2 years since and charges me a pittance but even he has tried to find me specialists for other problems and the same story--no insurance no gaurantee of any money at all! Grace

I count my blessings for the NHS in the Uk otherwise I'd be desititute.lol. My bipap machine which I use to assist my overnight ventilation is worth £2000 alone!
I never bothered with holiday insurance either but the one time I did it take it out I had an accident and had to be air ambulanced home from Greece!! £43 well spent.