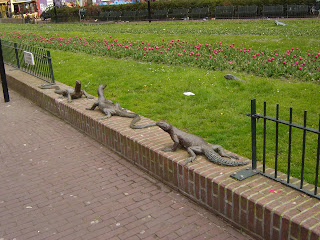 Fred is - at this very moment - attempting to make a meringue for the third time. He's tried it a couple of times before and something always goes wrong. We had one two Christmases ago at his sister's house. And we keep thinking that it would be a nice, light dessert for a dinner party. They're always a little brown, and they're sort of gummy in the middle.

Recipes for meringues vary widely. He found on on the Joy of Baking website. I would love to say that we're doing a third meringue, but it's his thing. He's the one searching for that illusive perfect recipe. One of the big problems is that the oven was apparently too hot, even though it was exactly the temperature the recipe called for. And we apparently added the sugar at the wrong time. And this and that. We'll see.

I'm glad to be in for the evening with little ahead of me other than finishing off a stamppot, watching a movie and knitting. I taught five classes today - one right after the other. I was only at work for six and a half hours, but the entire time was in front of a class. I took a half hour when everyone was gone to sort things and clean up the room before heading out. It's sort of exhausting to teach like that. And I feel compelled to try to have contact with each of them and let them know that I know they're there.

Still, I'd rather be doing this than...I'll just than a lot of things.
Posted by Andy Baker at 7:38 PM