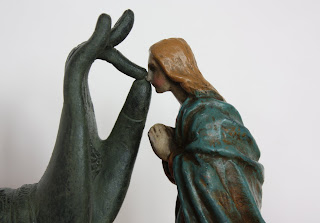 Of course this will mean nothing to anyone but Fred and me, but Fred finally got Mary's nose fixed - and, contrary to the photo, it was not by the hand of Buddha.

When Fred's parents died five years ago, he got possession of their nativity set. His parents bought/got it when they were first married and they'd been married for over sixty years when they died. So it is old and has been banged around by a lot of people over the years. Each piece has chips and nicks, but Mary had the added insult of not having a nose.

We took it by a repair place at least three times. It was always too early or too late in the year, and they wouldn't accept the job. (I know, right?) Fred finally dropped it by a fourth time and now she's fixed. It cost €10 and it looks pretty good. I was a nervous that it would look repaired. You can't really see it unless you look. Now he's going to take the rest of the set and we'll have it for next Christmas. They're only going to charge €150 for the whole set. I'm sort of amazed. I thought it would be much more expensive.

It's the (very Catholic) religious articles place on Spuistraat right around the corner from Het Spui. (In case you're familiar with Amsterdam.) They have a little display room down a few steps that is not quite six feet high. We looked at all the nativity scenes while we were all bent over. Religious articles are sort of fascinating. I didn't grow up with all of that.

Today was one of the most beautiful days I've seen in months. I was actually out this afternoon with no jacket and it was crisp, but not really cold - of course I was in the sun the whole time. I keep saying it, but I'll say it again. I think Spring is almost really here.

I think that having not had any little sun vacation has really colored how I have experience the winter. Next year we need to go away for a bit and get warm. This was an endless winter.
Posted by Andy Baker at 8:13 PM

I have our Nativity Set from childhood. It, too, has been through small children and moving. I should try to see where I can get it repaired. I never though about that. I love that picture, by the way. Kathy

It really was ENDLESS wasn't it? I'm so glad the sun is shining finally and the days are long. I love Spring.