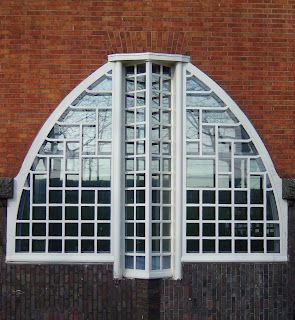 In response to yesterday' post, Cybele sent me a link to a website called "Dutch Word of the Day." I like the look of it and I immediately signed up for their mailing list (I never get enough emails. The novelty never wears off.)

What I like about the website is that it gives the word, the definition and how it's pronounced. But they also have a little symbol you can use to hear how the word - or phrase - sounds. Then they give a few examples of how it's used and they give some related words.

Listening to the recording of the man saying, "Daar heb ik geen boodschap aan" (That is not of my concern) reminds me of sitting my tiny little studio in NYC trying to learn some Dutch in preparation for my big move. I think it's the flat, non-contextual statement of the phrase that sends me back to a time when I didn't know enough Dutch to pull the words apart. They had no context and sounded so very exotic. I kept wondering, How will I use this new word?

In my mind, I saw a room with bare walls and I would take the new word or phrase and throw it at the wall and it would fall to the ground. (Now you know about my housekeeping.) What I needed was hooks on the walls so that the new words would stick. Eventually, I got some hooks. So now I can usually throw a new word at the wall and it has something to hang on to. Then newer words hang on the older words and they pile up. And now you know what the inside of my closet looks like.

One of the things I loved about Dutch upon hearing it the first time was how clunky it sounded. Have you ever heard Danish? Danish has a wonderful clunky sound too. On my initial trip to Europe, both languages made me think of a derelict car driving down the street - creaking and rattling. I thought, There's no way that can keep going. But it did. There's a reason these are not the "popular" languages like Spanish, Italian and French. Those languages just have a natural flow to them. They roll and flow like a babbling brook. Dutch and Danish sound much more jerky.

Of course Dutch doesn't sounds as jerky as it did initially. It makes sense to me now, and there really is phrasing and emphasis just like any other language. You just have to know what to listen for. Familiarity breeds...wait a minute. It's more familiar now, so I can understand much more of it.

Still, I don't know nearly as much Dutch as I would like to. So it will be nice to get a regular reminder that I should constantly be expanding my vocabulary and exposing myself to new words and phrases. And as I am who I am, my brain will just take what it needs and leave the rest.
Posted by Andy Baker at 4:44 PM

Andy, thanks for this link! I like listening to online Dutch radio(wat leuk!) and sometimes I have to smile at the intonation. My passive knowledge of Dutch is, being a German native speaker, of course good, but I never managed to speak well and use all these filling words like "hoor" or "echt" correctly. Does it ever happen to you that you know a word in the second language but not in your own? Do you speak Dutch in your dreams?

Concerning your question yesterday: I spent a really long time trying to remember the German expression for it. My suggestion for the Dutch word: pluisje? Or something else with a diminuitive suffix, I'm sure.

Danish really is an interesting language! Finnish and Hungarian also sound interesting. ;-) A few years ago I spent a week in Copenhagen visiting a friend. One day while she had to work I went to the city center by myself. In the bus, an old lady started talking to me. Later at McDon. a very cute little boy sitting on the same bench wanted to talk to me. It was so frustrating to be in a country and not speak a word of the language.
Oh by the way: is there an English word for "Fernweh" (opposite of being homesick)?? I've been thinking about this a lot. And feeling it...
Please say hello to the "lenteklokjes" in A'dam from me!

Thanks for the Dutch word of the day link. What a find! I'll use it to improve my daily Dutch usage. Hoera!

You've described trying to learn a language in isolation so perfectly - nothing to hang the words on. I know exactly what you mean. Actually, after living in Switzerland and struggling with French for 10 years I STILL felt I had nothing to hang the words on. I think it had to do what the other thing you mentioned - that French just FLOWS. It's too hard to break the words apart and hang them on anything. Learning Dutch I find much easier than learning French because those clunky sounds can be bashed apart and hung in places in your mind where they stick.

When I first heard Danish I thought it sounded like a made up language that just couldn't be "real". When I first moved to NL I thought that a lot of the language sounded "silly" or too goofy to be real. Ha! Now I do my best to imitate that goofy sound and hide my American accent!