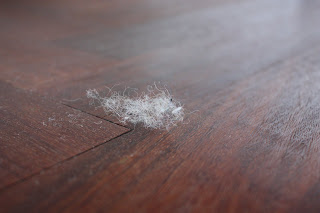 The other day, I asked Fred what these are called in Dutch. In English, I would say that it's a 'dust bunny' - although I'm sure the Scottish have a much more dignified word for them. Sometimes Dutch words are direct translations from English, (And this is where I would give examples if I were prepared.) so I asked him if it was possibly a stof konijn. He said no, but he didn't know what they were called.

We get a lot of them because we have a couple of area rugs - both in shades of white. Even after five years of use, they still give off a regular amount of fuzz. I can actually look at the floor and tell what day it is - if I forget what day it is.

There are so many things that I don't know the names of. Acquiring a second language happened (for me) in a big lump and then I was able to carry on a conversation to some degree. Since then, it's been coming in dribs and drabs. Today, someone said, "Mr. Baker, What is zeuren in English?" I didn't know. It's the verb "to nag." What's life if you're not constantly learning?

This reminds me of being in the eighth grade and my friend, Candice, and I were talking about something and she pointed to a part of her face and said, "What's this called?" We couldn't figure out what it was called and we were astonished that no one had come up with a name for it. I've since learned that it's called the bridge of the nose.

And apprapo of nothing, look at this wacky solution for glasses. I'll give you a hint. It's entitled "New Glasses Require Piercing Bridge of Nose." (There's a photo. Go look!)

So I'll probably never learn all the Dutch words for this and that. However, looking back to the conversation I had with Fred that started this post, neither will he.
Posted by Andy Baker at 5:46 PM

I think the closest you might get is 'stofnest', but that's more the place where the dust bunnies collect as opposed to the dust bunnies themselves. I think. Though this uses it as if it is the thing (scroll to the bottom).

first i'm impresses bu you're blog. You also make beautiful things.
dust bunny's are "vlokken" in dutch. I self think that dust bunny sounds much better.
Zeuren in engelish is janking, but that is more american english a think.

http://dwotd.web-log.nl/dutch_word_of_the_day/ is an enjoyable blog, even if Dutch is your first language!