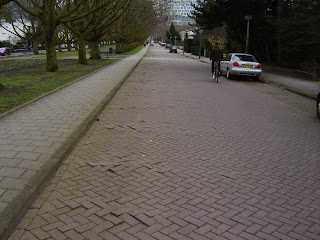 I ride down this street on a fairly regular basis. It's a nice street with some large, unattached houses that are well kept up. What's not kept up is the street. You sort of have to see the long lines of trees that run in the "park" between the two streets on which the houses are located to get the big picture of the problem. The trees are beautiful in any season and the "park" (it's not really a park, more just a green space) is a nice bit of nature to ride by regularly.

The problem is that the big roots of these really big trees are pushing up the bricks that make up the street. (I also really like that the streets are made of bricks.) It makes that side of the street all but unusable. In the photo above, a random guy turned down the street when I was taking this picture and he went to the right where the street is flat - of course. In the morning, when there are many more bike riders - like me - on this street, that one side gets fairly crowded. We're all bunched up on the good side of the street. 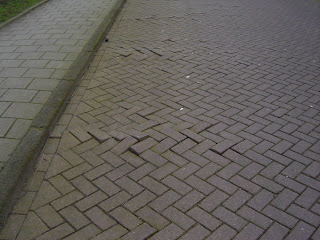 What can be done about this? I imagine they could take the bricks up, shave off some of the root and put the bricks back, but that would probably kill the tree or something. It's one of those huge problems that I'm glad I don't have to deal with.

On another bike path near us, which happens to be asphalt, they simply shaved the asphalt down. It's still slightly lumpy, but it's a huge improvement. Bricks are a different thing.

These are completely different road problems than I've ever had to deal with. There aren't many (if any) brick roads in the part of Texas I hail from, and in NYC the trees don't generally get this big. (I've heard that the average life expectancy of a tree in NYC is seven years.) And if they are this big, they aren't generally next to a street like this.

Everyone talks about the weather, but no one does anything about it. (One of my favorite quotes. Who said it?)
Posted by Andy Baker at 2:29 PM

I don't usually take your questions literally, but today - I did. The quote is attributed to Mark Twain, but originated from
Charles D. Warner, though his actual words were, “A well-known U.S. writer once said that while everyone talked about the weather, nobody seemed to do anything about it.” The remark is generally ascribed to Twain, with whom Warner collaborated on the novel, The Gilded Age (1873).

I googled it! LOL I love you. Miss you lots and wish you were here in Texas right now. Kath

This isn't bad. By my house there used to be a street that was so bad you almost couldn't drive a car down it anymore. Eventually they'll dig up the street, make a decision what to do about the roots (I think they can chop some of them without harming the tree), and then put the bricks back down. The problem is really that the water level is so high that the tree roots can't go down, so they go out (I think).