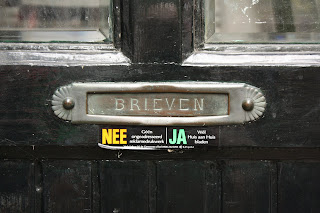 The day I took this photo, a friend of Fred's asked me why I was taking it. (Because...I need a reason to take a picture?) I said that it was because it was so different from mail slots in the US. First of all, I don't think I ever lived in a house or apartment with a letter slot in the front door, but if I did, it certainly wouldn't have said, "brieven," which means "letters" - as in post - in Dutch. I like how old this one looks. It's nicely weathered and was on on the front door of a house on a canal.

There's also the matter of these little signs "Nee" and "Ja." I never had that in the US either. They're answering two different questions. Do you want this kind of junk mail and Do you want that kind of junk mail. We used to have two "Nee" signs on our mail slot. I say used to because they changed them out a few months ago to these fancy new brass mail slots, and when they took away all the old weathered aluminum mail slots, they took our stickers too.

My friend, Mary, once told me that she really liked getting all the junk mail. "You can find some really good deals," she said. When I posed to Fred that we change at least one of the stickers, he said it was just a bunch of junk and he didn't want to deal with it. I said, okay and didn't think about it.

Then they changed the mail slots and now the junk mail deliverers see no sticker to mean that yes, we would like all the offers you have. We get a pile of stuff every day. I went through it the first couple of times. It was about a half inch of papers offering great deals on things I would never buy at stores I have never been to.

The one up-side is that the bulk of it comes wrapped in plastic so it's easy enough to bring it upstairs, take off the plastic and put it in the recycling bag. The downside is that our mailbox always has some paper offering in it. And some of the ding-dongs in our building just throw all the mess on the floor of the entry hall. How is that a logical solution to the problem?

Many years ago, a guy I worked with did something to me that was so mean and awful and humiliating that I literally left where we were and cried my way down the Seventh Avenue in NYC. In those days, I occasionally got little packets of postcards in the mail offering information on a product or a trail subscription on a magazine. Most of them were postage paid. All you had to do was fill in your information and drop it in the mail box. The problem with those things is that they'll keep sending you information and they sell your name to other companies so you get more junk mail. Are you seeing where this is going?

I filled the guy's name and address in on the cards and every day I took a couple of them and dropped them in the mail box on my way to work. I did it for a couple of weeks and then forgot about it. A couple of months later, my friend, Chris, saw this guy in a bar and talked to him. At one point, the guy said, "Every day my mailbox is filled with junk mail and magazines. It's crammed full every single day." Chris nodded. Then the guy said, "I know it was Andy. It has his name written all over it."

I don't really have access to that sort of thing here. Probably a good thing. And the junk mail thing? It's not my original idea, but use it as your own.
Posted by Andy Baker at 5:48 PM

You just made me laugh SO hard that I have tears in my eyes. Too. Too. Funny.

Ohh, I remember the junk mail when we used to live in Amstelveen. We'd get several deliveries a day, piles and piles of it!!

Anyway, just wanted to say hi! Cybele introduced me to your blog and it makes me nostalgic for my time in Amsterdam.