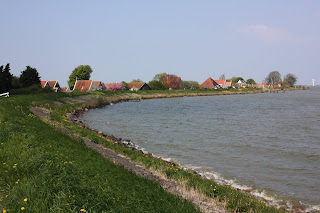 Fred and I decided yesterday that we would ride out to Zaanse Schans today. I haven't been there since my initial trip to the Netherlands and I am always good for a little touristy taste of my new country. So we dressed and printed out maps and had our shoes on when Fred said, "I have an idea."

"Why don't we not go to Zaanse Schans today. It's so far away. We should have started earlier."

"Sure," I said. I had no idea what he was talking about; in fact, I thought he was saying Monica-dam, which he sort of was saying. We got on our bikes and headed North. 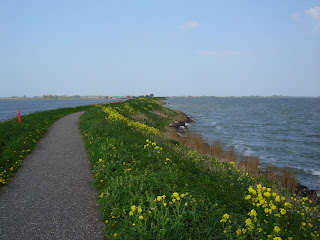 This is a picture of the dike we rode on. When we'd just gotten on the dike, I asked, "Are we going to ride to the end of this?" (There are occasional turn offs.)

He said, "No." (Was that an intentional misrepresentation?)

"How far away is this place?"

Not wanting to appear uneducated, I nodded and thought to myself, Is a kilometer longer than a mile or shorter? And by how much? 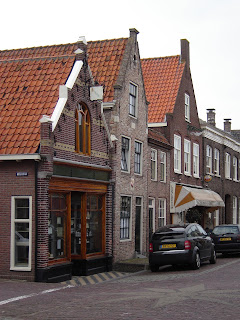 Long story short, it took us two hours from walking out our door to arriving at the back door of Monnickendam. Riding along the dike was difficult because of the wind. Fred rode ahead and I eventually decided to take out my ipod and listen to something as I trudged along. That was work. This is our third long bike ride this week and it was definitely the hardest ride - because of that wind.

Monnickendam is a cute little village. However, nothing was open except for places to eat, so we just got something to eat. It was also looking like rain, so we decided to truncate our visit (we'll go back on a day when the village is open) and head back the short way - knocking off five of those mysterious kilometers in the process. 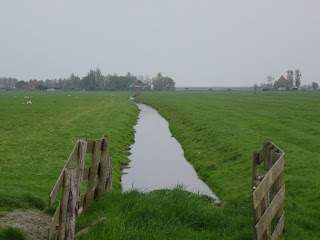 It was really overcast and the light was beautiful. You can't tell so much from these snaps, but everything was a really beautiful green. What you can tell from these pictures is that this is a really flat country. But I'm cool with flat. 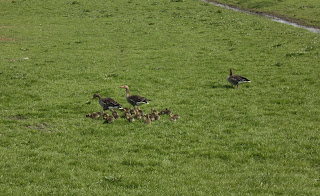 As it is spring, there were lots of little baby animals. Lots of geese with their goslings all in a pack. I looked at these large groups and wondered how in the world these mother geese were able to pick out their goslings at the end of the day from the other geese's goslings. Similarly, I've seen a whole school let out and mothers recognize their children immediately out of all the children streaming out of the school. Amazingly, at the end of the day, they bring the same children home that they dropped off in the morning. Life is full of mysteries. 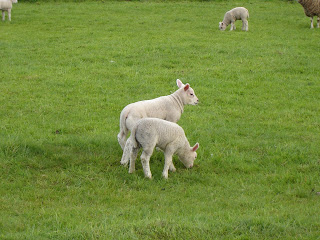 Watching baby lambs play is something I hope everyone is able to do at some point. They jump around and chase each other, like puppies or children. It's just beautiful. 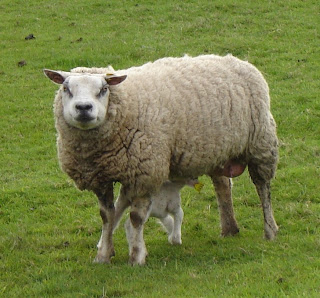 And then they turn into this - a beautiful, but less playful type of animal. I've felt more of a connection to sheep since I started knitting again. What's crazy is that their wool is so thick and dirty while they're wearing it. And then it gets turned into yarn. I fantasized last week about organizing a collective that shears, processes, spins and manufactures Dutch yarn. It's an overwhelming idea. I put that one to bed pretty quickly. 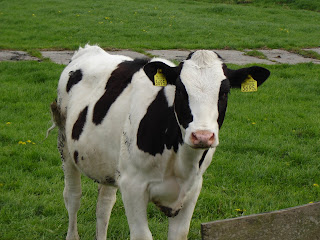 There are also a lot of cows out in the country. I feel a slight connection to cows because my father had cows when we were growing up. Not a herd, but one now and again. He had a cow named Button that he bought to raise for beef. But he got too connected to Button and just kept her as a pet. She eventually died - many years later - of a brain tumor. That's the sort of thing I think of when I think of my father. He's always put his heart before a business decision.

This was our last bike trip for a bit. I have a few other outings I'd like to do, and Fred just found a couple of bike excursions he wants to take, but no long bike trips for a week or so. I'm more physically exhausted tonight than I've been in a long time.
Posted by Andy Baker at 9:33 PM

put your feet up and do some knitting, man. I am exhausted just reading about those bike rides.lol

I can't believe you've been here for 5 years without figuring out that a kilometre is five-eights of a mile.

Yes Monnickendam is generally closed on a sunday - thats why I get my brad in Volendam!

I climbed up the clock tower at Monnickendam...scary ladders and everything due to inability to say I am scared of heights actually in Dutch. Cato lies about the kilometres on our road trips(its not far...) so conversion hopeless anyway.