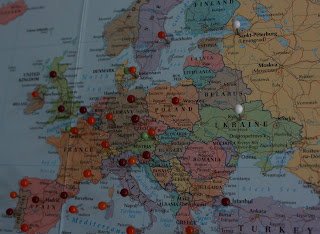 Tonight was the finale of the Eurovision Song Contest. It's sort of like Idols - except that it's totally different. This contest has been going on since 1956 and is open to (mostly) European countries only. (Oddly, Israel is now part of Europe.) I think the song has to premiere on the contest. There are no covers like in Idols. It also goes on for three days, not several weeks, like Idols.

This is the first year we've really watched much of it. We saw the second night (Thursday) and then tonight we saw the voting. Fortunately, I was able to see my favorite who was on Thursday and who ended up winning. It was Norway. The singer was a young guy named Alexander Rybak, and he is so totally cute that I just want to put him on a key chain and carry him around all day. Norway's song was I'm in Love with a Fairy Tale. Fred thinks it's totally cheesy, but I loved it every time I saw it because you can see that he's having lots of fun and he's got good backup singers and dancers. If you haven't seen it, click on the link and watch it. It's sweet.

After Fred said that Norway's offering was cheesy, by the way, I reminded him that the Netherlands had won with Ding-a-Dong in 1975. Give it a listen. One word: Velveeta.

The thing about this contest that I really liked was that some of the people, like Alexander, play instruments and appear to have a talent other than just singing. There were also a lot of songs that reflected the ethnicity of the country, like Moldova. I actually got a sort of a feeling for Moldova, whereas some countries just did very American stuff, which seemed to me to be sort of cheat-y. Azerbaijan did very well, but...uh, where is Azerbaijan? (Don't tell me. I know. Fred told me already.) Seriously. Have you ever heard of Azerbaijan?

The first time I ever heard of the Eurovision song contest, I was at Tivoli Gardens in Copenhagen with a friend. We happened to be there when The Olsen Brothers were playing. They played some very nice songs and then the played Wings of Love and the crowd went wild. I said, "What's with this song?" My friend, Mike, told me that it had won the Eurovision Song Contest with that song in 2001. And now every time I listen to that song, I am taken back to Tivoli Gardens.

Two years ago, we watched the finale and Serbia won. I said, "Serbia won with that song?" I mean, it was okay, but it wasn't anything I remembered the next day. Holland's offering this year was a completely sappy, cheesy tune sung by the Toppers. I was completely disappointed because it was so very Up with People and it seemed like they were...it seemed like the wrong venue for that type of song. It was just three middle aged men singing a "believe it yourself" kind of song. I felt like, you know, it's a contest. Go in there and try to win. Plus, even given that it was the wrong type of song (IMHO), it wasn't a very good song.

Fred looked up a couple of old songs. They used to be just normal songs. Now it's a big show, an extravaganza with fire works and light shows. They also used to have to sing in their native language, which I sort of like the idea of. I think Moldova lost points for that and little Alexander (He's 23. I can have an evening long crush on a 23-year-old.) sang in English. Next year I want to make sure and see they whole thing.
Posted by Andy Baker at 11:42 PM

A friend of mine travelled to Moscow to see the show. I like the cheesy ones best. Loved the crazy woman with the gladiator dancers (okay maybe i just liked the dancers).

I haven't watched it for years...back in the day when it was only on for 1 night!

Shame cos it used to be so much cheesy fun!

I think he looked a bit like Zac Efron which probably helped him win...

The Norwegian lad is seriously hot, I think. And perfect for Eurovision.

I used to watch it every year, but haven't watched it since it started taking more than one night.

I gather it was much less political this year - they did something to the voting to reduce that.