A Little Bag of Memories 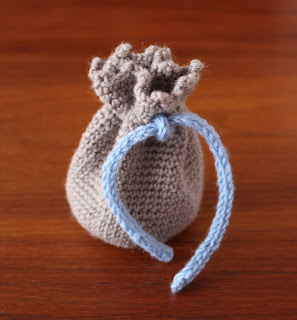 While we were going through security on our way to Warsaw last weekend, I had my knitting needles confiscated. The security guard actually stood in front of my holding a tray which held my 3.5mm (36 inch long) circulars and a mechanical pencil. She felt the tip and said, "This is too sharp. You can't take it on the plane."

I picked up the pencil and pointed to the tip and said, "This is sharper than that is."

She knew I was right, but she was being told by someone with some authority that knitting needle are bad and can't be taken on the plane. I've done it tons of times before, but I've usually already cast on, so it looks more like I'm knitting than that I've got a long wire shaped weapon with sharp ends.

As we were walking away, I tearfully screamed, "Confiscating knitting needles is so last year!"

I didn't really. I was too stunned. What does a person do on an airplane besides knit? Fortunately, I had a crochet needle with me. And I had my ipod.

Then, for some reason, my ipod quit working. It wouldn't do anything. I couldn't even play solitaire. And I can't crochet in silence. So I read a book I'd bought. It's a Dutch book - a thriller. Fred was unbothered by the whole incident. And he gets on the plane, reads a bit and falls asleep.

So I was in Warsaw for three days with no knitting, a single crochet hook and a ball of yarn. I made the little bag in the photo. When we got home, I finished it with a picot edge and turned to Fred and said, "I just made one of the most granny things I've ever made." But it's totally sturdy. And it's fairly well designed. The icord goes through a row of double crochet. It's not just tied on.

In Warsaw, we met a couple of American women. The one who was most taken with us was Vicky, a hard boiled woman who is originally from Little Rock, Arkansas and who will one day return to her husband and son who live in Houston. Vicky loves tall bald men. When we walked in, her table had discussed whether or not Fred and I were gay. Vicky said she had voted no. Of course the tall bald gay Brits she was with voted yes. (It's call Gaydar.) The other woman, Marsha, walked over and the first thing she said after Vicky mentioned that I was originally from Texas was "I hate Texans." Charmed, I'm sure. Marsha was a thin little thing with bad dental work and she was dee-runk.

"And, Marsha? I love your hair. The Eighties was fun, wasn't it?"

So strange to meet Americans while away for the weekend. They've both been in Warsaw longer than I've been here. What a random place to spend seven or eight years - and neither speak the language. I like talking to American who live outside the US. It's amazing the ways people cope.
Posted by Andy Baker at 10:11 PM