I'll jet through this last post. It's a bit of architecture, churches, and food - and not a lot of any of them. 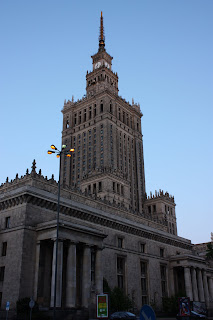 A lot of Warsaw's architecture has that post-WW2 Socialist Realist feel to it. The building above, for example, the Palace of Culture and Science, was a gift from Soviet Russia and it was designed by a Russian architect. I liked it. Fortunately for us, it was right across the street from our hotel, making our hotel easy to find. Unfortunately, it's sort of square. So a couple of times we were looking at it, but we weren't sure which side we were standing on - and it's a long way from one side to the other. We never went in. We meant to, but we got back to the hotel on the last day, realized we'd missed it, shrugged and said, "Oh well...next time." This was shot from the courtyard of the Banking and Finance Center. We walked by on a bank holiday. These square, gray, solid buildings look really great when there's no one around. There was another couple - a mother and son combo - who were taking pictures of this building while we were there, but it was big enough that we were able to avoid them. 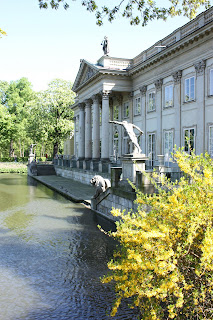 There are a lot of palaces in Warsaw. This palace, that palace, a former palace, etc. (I think they're overusing/misusing the word.) The photo above is of the Palace on the Water. It actually looked like a palace, whereas some of the other buildings looked like just another a very large building. This had a lot of repairs done to it after the war because rather than blowing it up - as they had planned - the Nazis just set fire to it before they left. Thanks, you guys, hope that taking over the world thing works out. 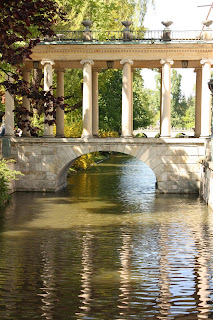 The palace was crowded with people and there were a couple of peacocks, which were causing a bit of a fuss. They were squawking and people wanted pictures of them. The peacocks weren't cooperating. Not a lot of "back feathers up" photos. But some nice snaps of the canals and lakes. 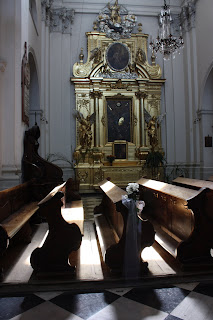 Something else there were a lot of were churches. A huge church filled with statues and art and right next to it would be another huge church. It was ridiculous planning. Warsaw must have a lot of Catholics. However, if you've seen a lot of old European Catholic churches, you've pretty much seen these. They're pretty, but I sort of felt like I'd seen them already. 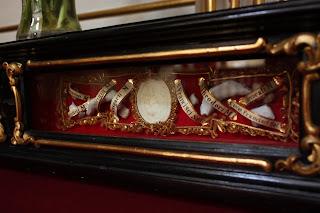 One thing I hadn't seen was some really good relics. I've seen relics before, but these looked like they'd just been cleaned and remounted. I forget what church this was, but they were beautiful and fascinating. A lot of the ones I've seen are just brown bits of a bone that were glued to a piece or red velvet 70 years ago. These were big and nicely mounted. (These are relics, right?) 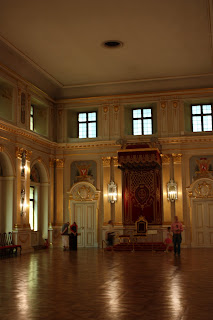 We visited the Royal Castle on the last day. I was a bit ambivalent about going in. It's a massive structure, and it's beautiful, but the real castle was destroyed by (say it with me now...) the Nazis, in 1944. So this is largely a reconstruction and - I hate to say it, but - it sort of feels like it. Everything is really new looking - especially some of the statuary. That said, I liked seeing it because it's beautifully done and it does give you the feeling of being in a really old Polish building. But it didn't give me a "King Zygmunt III slept here" feeling. 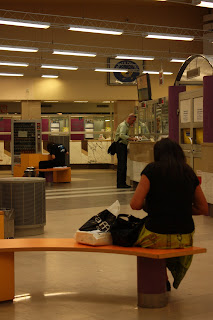 This is me buying stamps at the big post office in Warsaw that is - this is my favorite part - open 24/7/365! When I went to get a number (they are very organized) an old woman walked right up and tried to grab my number. Without thinking, I said, "What are you - nuts? Get in line!" To be fair - to me - she was pretty crazy and after I took my number she just wandered around muttering to herself. Buying the stamps was a slight challenge. It called on my vast array of non-verbal skills. Pointing, hand gestures, the universal holding up of fingers. Oddly, speaking English really loudly doesn't always make people understand what I am saying - but I tried that too. 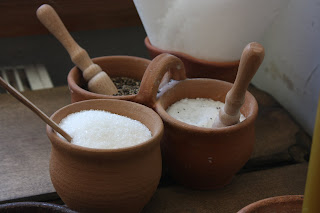 The first night of our stay, we asked the guy at the desk for a restaurant recommendation. I wanted something very Polish and very normal. I was thinking of a Polish diner in NYC and I wanted a plate of pierogi like I used to get there. Yes, it was a lot to ask for, but if you don't ask...

He sent us to Delicja Polska, which is a little chi-chi and not what I was hoping for. First of all, it was a beautiful evening and all of the street cafes were filled. This place had no sidewalk tables. The whole thing was in the basement, which was unfortunate. And as far as the decorations went, it looked like Poland's gayest man and someone's grandmother had had a child and that offspring had grown up and decorated the restaurant. It was over-the-top in a lot of strange ways. Lots of flowers and too much of everything. Cute idea, though. And the food was really good. I probably should have said that first. The food was great. A little fancy, but really good Polish food.

The second day, we found another restaurant, Klaskyka Polskie. (Full disclosure: I found it and insisted on walking in to ask if: 1) they spoke English, and 2) they were open for lunch.) I didn't get a plate of pierogi, but we got some fabulous potato pancakes (mine had goulash on them and Fred's had a mushroom sauce), and went back in the evening for the Polish plate. The Polish plate was various kinds of Polish food, one of which was pierogi and one of which was potato pancake - again. I'd complain, but they were good every single time: thin and fried with a sauce. It's a heart attack on a plate, but they were delicious.

The Polish apparently haven't gotten wind that there are other vegetables in the world besides cabbage and carrots. This was also not a diner, but it was cozy "as all get out," as my father would say. You can click on the link and see the restaurant: a little artificial in appearance, but I'd totally go back.

I really love trying the local cuisine when we travel. I always think about how much my father would enjoy it. He likes different kinds of food. I've always been a good eater like that.

Side note: Along the Nowy Swiat were several coffee places. Coffee Heaven was one. (It...disappoints.) They also had several others, including a Costa and a Starbucks. Apparently the Starbucks had just opened because it was completely crowded with people - including an American and a Dutchman a couple of times.

While I was talking to my student today, she told me about her trip last weekend to Budapest. She had that "Wow!" feeling when she was talking about Budapest. I don't feel "wow" about Warsaw, but I enjoyed the trip. I wish I'd worn better shoes. It was an interesting city to see, one that I don't think a lot of people (comparatively) are going to bother with. If I were going to make a suggestion, I'd say you could probably save it. It'll get better as the years go by. Apparently there's an ongoing effort to improve it. But if you're in the neighborhood, definitely stop in.
Posted by Andy Baker at 5:54 PM

My son will be in a large group of school children this summer (30 to 40 5th and 6th graders, conveniently identified by their matching shirts and lanyards) touring England and Scotland. Consider yourself warned.