On Friday, we headed out to see the Former Jewish Ghetto. It's in a completely different part of town than the Old Town and the New Town. We walked to get there. It felt really far away. 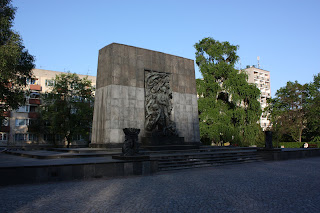 There's a Path of Remembrance and it starts with the Monument to the Ghetto Heroes - shown here. It's large and, as with a lot of these monuments, it includes a lot of empty space. 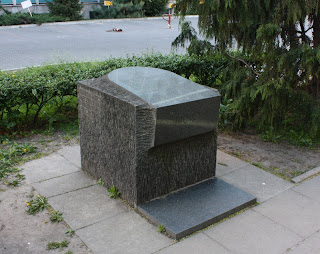 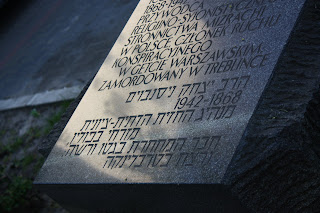 When we walked the path, it led us along some streets where we saw little markers like this one. They're engraved with why the spot is significant. However, they are only engraved in Polish and Hebrew. If you don't read either one, you're sort of left out of the experience.

The main problem I had with the walk was that the ghetto is gone. There's nothing much to see. But on top of that, there was no real hook to draw me into the whole experience. I couldn't even read the monuments. I was made to depend on my scant knowledge of the war and the uprising, plus whatever help the guidebook could give. I know, poor me. I'm a white Protestant American male and I feel all left out. Boo hoo. I'm just sayin'. 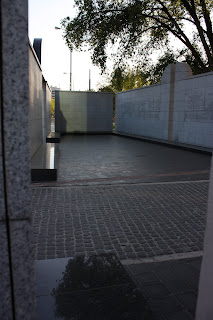 The part of that walk that I found the most moving was the Umschlagplatz Monument, which is where people were loaded into boxcars and shipped off to death camps. It's designed to be in the shape of a boxcar. Now that's a well-designed monument. The walk as a whole, however, was a bit disappointing. Granted, they don't have much to work with since most of the buildings were leveled, but most of it didn't speak to me the way other monuments like this have. 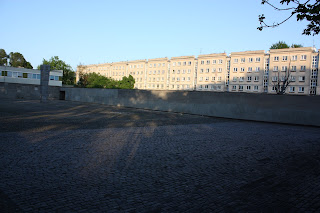 The site of the Pawiak Prison was also well done. Again, it's empty space. There were not any tourists (except us) around. It's just these monuments in the middle of a neighborhood. It would be interesting to live near one of these and see it every day. I like that they didn't build anything where the prison was. It's just a gated off space. On the other side of the wall that is on the right in this photo is a tree. 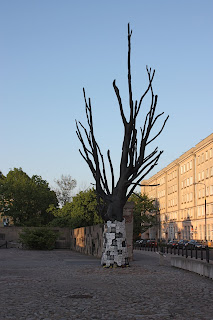 Fred and I discussed whether or not the tree was real. It's definitely not alive. But it looks like fiberglass to me. There are obituaries nailed to it. It's a nice addition to the whole prison monument. 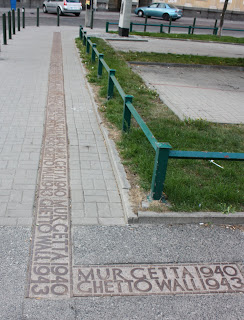 One thing I liked in Berlin and that I liked here - and there's even one here in Amsterdam - is a line in the ground where the wall used to be. In Warsaw, it's the Ghetto Wall. I tell you, spending a whole day reading about the havoc wreaked by the Nazis was disturbing. We walked towards a piece of the wall that is standing, but got turned around and ended up missing it. We didn't go back. My feet were killing me. 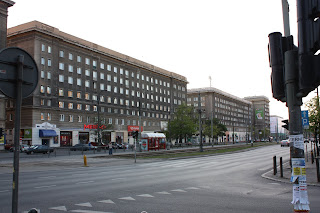 When the walk down the Pat was over, we walked back to the hotel past these lovely buildings. Big gray buildings. Fred said that the EU is sending Poland a lot of money. I said, "Just send paint." Everything is so gray. It's just cinder block gray buildings. 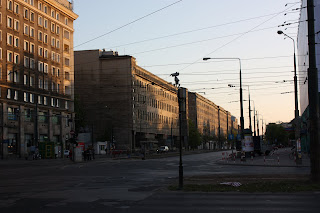 Street after street. It's everything you would expect a place like this to be. It was not the prettiest side of Warsaw. 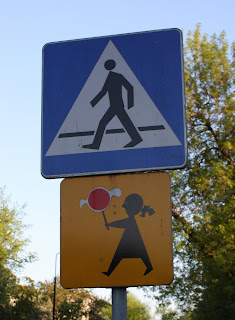 Then there was this sign - the one with the girl. I have no idea what it means. Yeah, probably children playing, but what's she holding? Is that a lollipop? A balloon?

When we got back from Istanbul, my friend Venessa read my posts and said, "Well, I can see you didn't enjoy it." We did. We just weren't...taken with it - like she was. That's sort of how I feel about Warsaw. We enjoyed it, but then there's this whole cloud hanging over the city with the history and with how cut off it felt.

Oh well. Tomorrow is churches and other architecture - and a bit about the food.
Posted by Andy Baker at 3:19 PM

Fancy that! A monument to Jewish people in Warsaw that's written in Hebrew and Polish!

The whole world has to be always eager to please the American tourists. After all, they know so little about Geography... How can do actually learn something if it is not in English ?