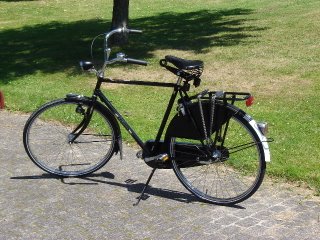 I drove a car for years when I was living in Texas. I got one when I was 15 and I had a number of cars after that, but I never had a brand new car. It seemed excessive and expensive and I kept hearing that once you drive it off the lot the value decreases tremendously.

Similarly, here in Amsterdam, I have had three bicycles and none of them have been new - until Friday.

Fred bought me a new bike for my birthday and it is an absolute pleasure to ride. It's an "opa fiets," or grandpa bike, meaning it's an old style. It's an Old Favoriet.

I had a question about the seat because it's leather and loaded with lots of springs. It didn't seem soft enough. But as it turns out, it's has enough give to make the ride comfortable. (I was given a little line about it eventually conforming to the shape of my butt, but I think that will take a while.

The new bike also has gears, which I really love. My second bike, Fred's father's old bike, had gears and they came in handy once in a while. I may actually bike to work one of these days.

My friend got her very first "oma fiets" from her in-law and fell in love with it. Something about the seat and the height of the bar...

Her old bike was stolen and she has just bought a brand new oma fiets from Praxis. Yes, she spent like 200 euro on a granny bike instead of a cool mountain bike.