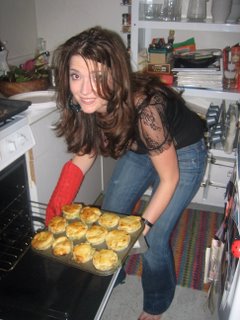 A few years ago, I did a stint at a bank in NYC working as a temp secretary as I prepared to move to Amsterdam. A few months after I started, a young beach blonde named Patricia started in my department. We connected quickly and began a conversation that included my impending move and her plans to move out of banking into something she really loved. We also talked about knitting, which I had been doing for some time. Patty (when I knew her, she was Patrica and I was Andrew) knitted a giant scarf and refused to rip it out (as I suggested) when it had grown into a giant mass of lovingly knotted yarn. Instead, she said, "I'll just make it a shawl," which was an interesting choice for a 23 year old.

Patty mentioned a cookbook for young adults that she thought would be a good idea. I left for Amsterdam and Patty eventually left the bank to seak her bliss.

Last week, I got an e-mail from Patty who has written the book and started a website/blog to promote her name - it's Patty Kriz - look for it. It's interesting to see the new Patty, who has slimmed down and grown her hair out - and done away with the blonde.

Nice to see her again in the age where I have a blog and Patty has a website. I'm loving these times we're living in. Everyone should have a website!

Get yours today!
Posted by Andy Baker at 9:54 AM