Twined Knitting and My Weekend

Yesterday, I went to a workshop given by a couple of Dutch women I met several weeks ago at the regular Monday night Stitch n Bitch in Amsterdam. The workshop was on Twined Knitting. I had seen a Swedish woman doing twined knitting at the Stitch n Bitch Day in Rotterdam a few months ago. As she explained it at her booth, I had no idea what she was talking about, but I dropped twenty euros on the book any way. Of course the book is in Swedish with a bad English translation insert. So I was glad when Carla and Hilly offered the workshop. 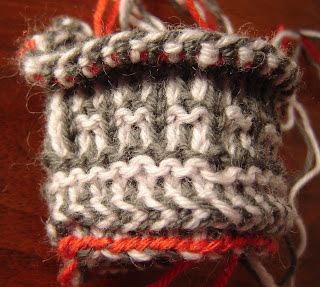 This is what we produced. It's about big enough to be an "egg warmer." There are several different stitches in there. There's a knit and a purl and one where you carry the yarn and some other stuff like the O-stitch. Then we made a thumb and decreased. The bind-off on the thumb is with six stitches. They call it a "blossom" bind-off. I've always referred to it as the "cat's butt hole" bind-off - more descriptive. Blossom? Please! Apparently, my decreases were very good. Good for me. 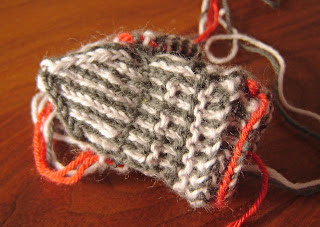 As a technique, it's a little fiddly. You're working with two colors of yarn and the whole point is to continually twist the yarn, so it keeps getting twisted up. So you keep having to untwist the yarn. And the whole thing is done on double points and I'm totally a two circulars kind of guy. But the end product (they had several on the table for us to touch and coo over) is so lovely that I'm completely inspired to make something. They gave a couple of patterns and I'm even went off my yarn diet - to the tune of €5,90.

Carla and Hilly were really lovely. I'll take a workshop with them again. Everything was explained well and there was lots of hands-on help if we needed it. Supplies, lunch and coffee were included. It was a whole room of Dutch ladies and me and a young American woman - Anna. (God often sends me an American to talk to in situations like that.) Everyone came away with a little swatchy thing and lots of inspiration. Did I mention that there was a lot of laughter? A room full of Dutch women chattering away and laughing - not a bad way to spend six or seven hours.

In other knitting news, I am working on this sock, which is not ever going to be worn. (I've got other plans for it.) I am trying to make all the mistakes on this experimental piece before I launch into a full-blown pair with my good yarn. This is a modified An American in China sock by Gryphon Perkins. I would like to draw your attention to the heel flap (the part at the bottom). It's done in linen stitch. It's so beautiful. It's just K1, slip one with the yarn in front, but I'm amazed. And Ms. Perkins was nice enough to send me the pattern correction when I wrote her to tell her that I was enjoying the pattern, but I had a question. Apparently, it was screwed up on the website. It seems to be fixed now. (Not something you can do with a paper magazine, is it?) 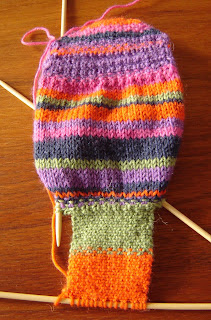 This yarn is totally wicky-wack, as Fred likes to mock me by saying. It's my experiment yarn. The stripes entertain me while I try new things.

To top off the weekend, we saw Before the Devil Knows Your Dead last night. I am crazy about Philip Seymour Hofman. Ethan Hawke looks terrible, which I loved (that he let himself look so used up). And Marisa Tomei is topless a lot, which doesn't seem to be the norm lately. I liked that she did it. It takes guts - and she's a fun actress to watch.

We're a movie behind on our goal to see one every two weeks this year. I must say that the title of Before the Devil Knows You're Dead bothered me. I featured something like No Country for Old Men, which I have no interest in seeing. Instead, it was one of those train-wreck movies like A Simple Plan. Someone hatches a stupid plan to make a lot of money and it goes wrong. Then it's about an hour an a half of watching everything fall apart. It's like watching a train wreck.

Loved it. I love the feel of a fresh new week.
Posted by Andy Baker at 9:46 AM

Andy, I'm so glad you liked the workshop! Hilly and I were a bit worried about you, a men between all these ladies that were thrilled that they finally met a real knitting man......
Hope to meet again soon, we love to teach you some more knitting techniques. Success with your Twined Knitting!

PS A post with photoos of the workshop will be on www.lifenknitting.net 8 April.

I want to do that American In China sock too. I have so much on my plate right now & with sock wars coming up I'm trying to clear it so I won't be tempted and end up dead! :P

Can't wait to see what yarn you use.

Also I'm sure the twinded knitting makes VERY warm wind resistant pieces, I'm sure I would be inspired too!