We are back in Bangkok. Strange that it's the third time we've checked into this hotel. Feels almost homey. The trip to Chiang Mai and Northern Thailand was completely different than we expected.

We had a first class compartment in the train, but it was not the first class we are used to. There were roaches and it was cramped and sort of dirty. Still, we made the most of it and I got some fierce knitting time out of it. Unfortunately, at 9:45 in the evening, the conductor insisted on putting up our beds. I'd agreed to take the bottom bunk since we had spotted a couple of roaches and Fred didn't really think about the fact that that they can scale walls. I knitted until just after ten and then went to sleep. Fred tried to stay awake (to fend off the roaches), but didn't make it. The train pulled in at 7:00 and we were off to the hotel.

We hated the hotel for a number of reasons I won't go into here. We were only there for one night and we were picked up at 8:30 the next morning for our "trek." We thought it would be a little hike around the jungle and then we'd stay over night in some lodge where the biggest inconvenience might be a shared bath and air conditioning that wasn't quite up to par. We were both wearing the wrong shoes (and not just because they didn't match our handbags.) 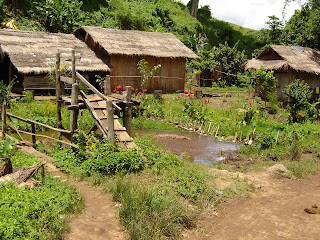 We were taken to a mountain village where we ate lunch and finally our elephant picked us up and we headed down a muddy little path for about an hour to the the middle of a jungle and the driver dropped us off at a tiny little outpost that was nothing more than a platform. 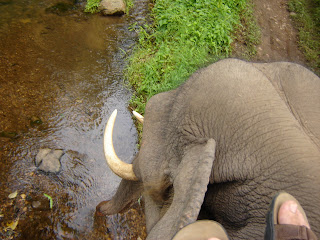 After a three and a half hour hike through the jungle up a mountain, we arrived (sweaty, muddy and exhausted) at a bamboo hut. No running water. No electricity. But an incredible view. We actually went to bed (and immediately to sleep) at 8:30 because it was dark and there was nothing to do and we were both dog tired. 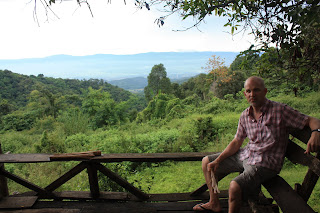 The next morning we walked down a muddy, horribly slippery path for an hour an a half (losing our guide part of the way down) and ended up at a tiny village where we were then taken to a "lodge." We had cooking classes, a garden tour, a vegetable carving class, a bike ride around the village and a tour of a neighborhood market at 5:30 in the morning. It was nothing like what we expected it to be. (We had received no details.) We had no free time and we were still recovering from out mountain climbing workout. But the food was good and we learned some new tricks. I can do things with an eggplant now that you wouldn't believe.

We got back to Chiang Mai and showered for the first time in what felt like a week. (It had been two days.) We walked around a bit. Didn't get too much done, but it seems like a city we could see again and send more time in. Charming in a way. We flew into Bangkok this morning and went immediately to the pool to soak and sit like we've been waiting to do.

We had some fabulous (and really spicy) Chinese food in Chinatown this evening. We're going to alternate seeing Bangkok and lounging by the pool. The whole point of these last few days is to lounge a lot. It feels like we've been gone for a really long time. I'm writing more detailed journal entries for anyone who's interested. I'll have to figure out how to post that. It's been quite an experience.

And we're home on the 27th for anyone who's keeping tabs on us.

It seems someone is used to the finer things in life, haha. What a great adventure.. I'm half envious/ half relieved to be sitting in my comfy bed with a hot cuppa.
Have a great remainer of your holiday. Be sure to get some shopping time in.

I am enjoying traveling with you vicariously, and will be happy when you are home safe

i love chiang mai!! but i didn't go on any muddy hikes, thankfully. hope you get to spend some more time relaxing there next time.

Will has requested we have an eggplant available at Thanksgiving. Can't wait to hear more...!

We got back to Chiang Mai and showered for the first time in what felt like a week. (It had been two days.) We walked around a bit. Didn't get too much done, but it seems like a city we could see again and send more time in. Charming in a way. We flew into Bangkok this morning and went immediately to the pool to soak and sit by the pool like we've been waiting to do.

Hope you got home safe xx