The Cast from The Big Day 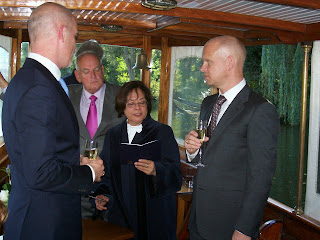 Okay. I said I'd recap the day, so I'll do it now and then I'll be done with it. This is a picture of Fred and me right after the ambtenaar finished. She gave us some sparkling wine and then read something about our getuigen (witnesses). It looks like we're in the tropics, but it's actually just the plants lining the canal. We got on the boat at 15:30, she started the ceremony at 15:45 and it lasted for about 25 minutes. We stayed in the boundaries of the Oud Zuid part of Amsterdam (otherwise it wouldn't be valid). After she was finished, she and her assistant (pink tie, above) got off and we rode through the canals of Amsterdam for a couple of hours.

The boat dropped us off at the restaurant (le zinc...et les autres) and we stayed there and ate for about five hours. These Europeans eat slow. The food just kept coming. We were stuffed. It was a very nice meal. There were ten of us in total. 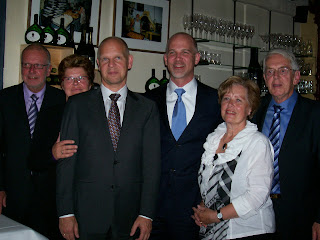 This is us with Fred's side. Left to right, Ton (brother-in-law), Vera (sister), Fred, me, Ada (sister) and Bart (brother-in law). His sisters were his witnesses. He's got a very nice, very large family. 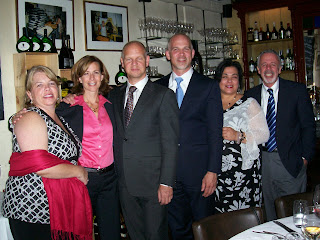 This is my side of the wedding party. Kathy (my sister), Patty, Fred (making a really unfortunate face, but the rest of us look so good that he's going to have to live with this), me, Venessa (a friend who lives here) and Butch/Bob. (Call him which ever you want - just call him.) Patty and Butch were my witnesses. Kathy was here for all of 52 hours before flying back to Texas. Patty was here for three days. Butch is staying for a couple of weeks. 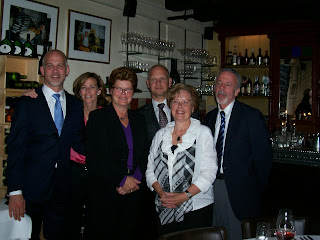 And this was us with our wintesses who you've met before. This time, Butch has the unfortunate mouth going on. Notice how I look reasonably good in all these pictures? See whose blog this is? See how that works out?

On Saturday, the American contingent came over and Fred and I made dinner (Thai food - we took cooking classes in Thailand) and the we played my favorite game in the world - Celebrity. If you've never played, I recommend it. Instructions can be found here. It sounds sort of confusing, but it's great fun. And after I taunted her for a while, Kathy got really into it and kicked some butt. We played guys against girls, and the girls won. If you happen to have a group of gay men and the women who love them in a room, that's a great group to play with.

Thanks for all the good wishes and congratulations. That's the last you'll hear of the wedding - unless it's not.
Posted by Andy Baker at 5:48 PM

Thank you for asking me to be there for you and Fred. I had the most amazing time and cannot wait to get back next summer! And yes - I did kick some butt!!

Love you both - Kath

Yes you did Kathy! And I will never forget that priceless clue you gave for our famous first lady...!

I can't believe you got beaten by a bunch of girls though!

As for patty's comment, this is where I think I'd fall down on this gamr - I haven't the faintest idea who the first lady is. Well, apart from Mrs Bush that is.

Julie (and Catherine and Andy)

Andy,
You both look great and looks like you had the perfect wedding. It was nice to see Kathy, have not seen her in a few years! Congrats to you and may you have a lifetime of happiness! NOW, e-mail me sometime to catch up.
Amy