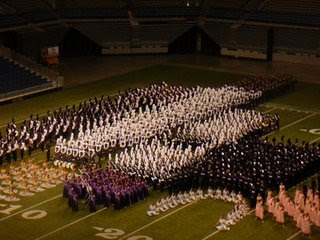 When I was in high school, one of my favorite things about the school year was marching band. It was military style back then. All straight lines and right angles. We started rehearsing in early August (when it was hot as blazes) and marched in games through the fall. It was fun, but marching band was never the point. (The point was concert band.) Hence, we never went to competitions outside the regional things, which we always won handily.

These days, my sister, Kathy, has two kids in that same band, but things have changed quite a bit. They are now a show band. No one does military any more, which is too bad. We used to look at show bands and laugh. I remember when making a circle was a big thing. And my senior year, we spelled out "L D Bell" and then a minute later spelled out "Raiders." That was exciting then, but it's nothing compared to what the kids are doing these days.

Apparently the Bell band does rather serious, dramatic, "adult" music, which is something I can get behind. A lot of the others do lighter stuff, show tunes and the such. Here's a clip of them in San Antonio. I love it because it's this gigantic mess of kids marching around. It's big - like you'd expect something in Texas to be. It's big like cowboy hats in Texas are big, like hamburgers in Texas are big. It's just ridiculously big.

These days, the band has a color guard that is huge. Back in my day, there were about twelve of them and from the stands, you couldn't tell if they were boys or girls. These are all girls and they run and twirl flags and act dramatic. We never ran.

So they're off to compete in Bands of America, which they won last year. No band has ever won two times consecutively, but they're going to try. They have to take a bus to Indianapolis. We never rode that far in a bus. Kathy says she's ready for it to be over for the year. She's a very dedicated band mother. My mother was dedicated as well, but it's a lot more work these days.

Good luck to Michael and Alyssa and the band. I hope it's cold in Indianapolis so they can wear their new gloves.

I love that you posted this! Thank you for including me in your blog. The kids had a great time and we are done for 2008. Things are finally feeling slow and normal again - for now! LOVE YOU! Kath

You are right, L.D. Bell Band was worlds different from what is has become. I loved the feeling of many gifted individuals coming together to make something very special. Following the L.D. Bell Band this year was one of the most gratifying experiences in many many years. Since I had the privilege of dating a devoted band mother, I passed out water bottles to the kids at various break times. To listen to the band perform, while being in the middle of everyone playing, gives my goosebumps goosebumps. I wish you could have been there Andy !! It was AWESOME !!!