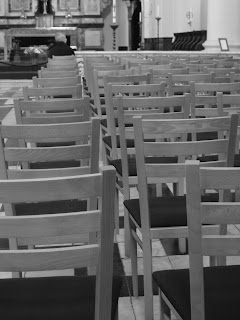 I've watched a number of television series from beginning to end: Six Feet Under, Sex and the City, Oz, Carnivale, Deadwood. Most of them were on DVD and I just sat and watched them - mostly with Fred, but Oz pre-dated him (and was on video tape) and he wouldn't watch Sex and the City if you paid him. DVD is such a better way to see a show like that. And when it's over, there's nothing else to see (except the extras, which is often just about seeing what you've already seen). And there's that strange empty feeling when you've got to move on to something else.

Similarly, I watched the O.J. trial every morning back in 1994 as I ironed my shirt for work. And we talked about it at work off and on. It lasted about a year, didn't it? It felt so unreal to me. It was like a strange, badly written drama. And then one day the jury came back with a verdict and it was essentially over. I sort of missed it.

So now this election is finally over and as much as I try to find something on television or the Internet about Sarah Palin or some wacky thing that happened on the campaign trail, there's nothing to see. Obama and McCain have gone home and the news has moved into the post-election cycle where world leaders say nice things about Obama and how they look forward to working with him and blah blah blah. Boring.

This week has been so busy. I have a really full schedule and I'm sort of sleep deprived and I didn't really have a weekend any way. So I'm exhausted. I have to say, though, that I love my job. Teaching is a really good job for me. And we're singing some really good stuff in choir. And I'm working on a pair of gloves that's going pretty quickly, so I'm glad they're almost done. So all in all, life is not very exciting, but it's good.

I'm so very happy about the outcome of this election. I'm very optimistic about the future.
Posted by Andy Baker at 10:34 PM

I loved OZ and bought Carnivale but I'm with Fred..you can keep Sex In The City!! I loved 'The Tudors' the totty made up for the terrible historical inaccuracies!!

ohhhh whats happened to your daily blogging? Stop being busy out there having a life, haha. xx