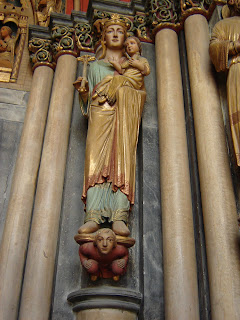 A woman I spoke to today at church said something about a white rabbit. She said that when she was a child, her father used to play a game wherein everyone competed to be the first person to say "White Rabbit" on the first day of the month.

She is now the mother of two small children and she said, "Today, I was the first one to say, white rabbit." She was quite pleased with herself. She has what is apparently a York accent - that's York in the UK, not a really 'in' way of saying New York.

I remember someone (years ago) telling me that it was good luck to have white rabbit be the first thing out of your mouth on the first day of the month. While good luck appeals to me, the idea of a competition appeals to me more. (I'm slightly competitive.)

By the way, I am participating in NaBloPoMo - National Blog Posting Month - again this year. So I'll be posting every day this month. It's sure to be no picnic, as I have just picked up some extra classes to help out a colleague who is ill (and the course planner who sweet talked me into doing it) but I shall sally forth and get it done. I've inspired at least one other blogging friend to do it. Check out Louise.

This photo, by the way, has nothing to do with white rabbits. It was taken at a church we visited in Maastricht several months ago. Apparently it's okay to stand on the back of a child if you are the mother of the son of God. (I don't personally believe that Mary would do that, but it's not my church.)

And, yes, Alastair, I backdated this post.
Posted by Andy Baker at 4:00 PM

I didn't say anything!

My parents also compete on who can rabbits on the first of the month. People do look at you if you are from another planet when you tell them - who cares!!!!!!

Neighbor Paula learned it as "rabbit, rabbit", and has David doing it now, too. I refuse.

Are you sure that's not an angel Mary's standing on? Maybe a small cherub holding her up in her exalted place?