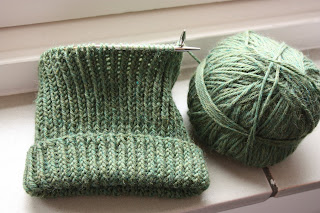 I've recently been on a little hat binge. I wanted to make one for our friend, Catherine, to give her at Thanksgiving and it ended up being too small, so I made the bigger version. (Oh my God. He's not going to talk about knitting, is he?) Indulge me.

I knit the larger size and included a stripe of Noro Silk garden that I had laying around. (I was afraid of runing out of the main yarn.) It worked perfectly. I don't know what the green was. I got it in a trade. The woman assured me it was 100% wool. And it's pretty soft. The one 100 g ball made almost two hats. The middle picture is the best color. 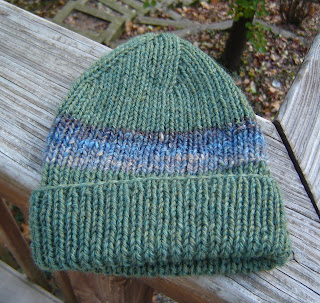 I sent the smaller hat in a box with some other stuff to my sister. This is a nice little pattern called The Marsan Watchcap. It's a good and basic and has an interesting bind off. Totally easy to memorize. Really good for traveling. I knit almost the whole way there and on the way back. They're very quick. 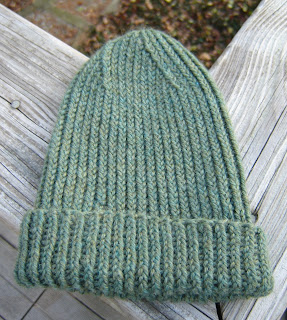 Then I decided to use some wool I bought last year at Stitch 'n Bitch and knit a hat for myself. The wool has a lot of lanolin in it, so it was sort of greasy to work with, which I liked. It was very musky - feels very "close to the sheep." I did some Noro stripes on that one too, but more elaborate. It's drying now from being blocked. It feels the slightest bit stiff, which is annoying, but I think it'll soften up. Now I'm in search of a new project.

I also recently finished two pairs of gloves, for my youngest two nephews. I'll have to post those, too. I'm feeling the slightest bit guilty for not posting much during November. I usually like a challenge and I respond with enthusiasm. I think I'll do my own NaBloPoMo at some point.

I'll have to write about our return trip from Ohio. It was l o n g.
Posted by Andy Baker at 10:43 PM

Thats a very nice hat and I need to knit a quick Xmas gift so might give it a go. The Noro stripe is a nice touch.