The Long Trip Back 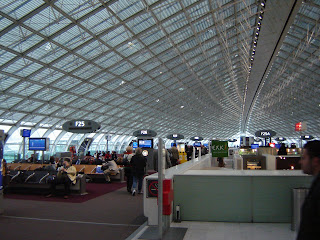 Our trip back from Cincinnati seemed ridiculously long - and it was. The original plan was to get on the plane at about 11:00 in the morning in Cincinnati, change planes in Detroit, and get into Amsterdam at about 6:15 on Monday morning. From there, I would go to work. Sounds horrible, but I'd planned a light, energetic day at work so I could stay awake and wouldn't have to call in a substitute again. Thanks, Alastair, for invigilating for me.

Patty dropped us off at the airport at about 10:00 and we went to the Starbucks before heading to our gate. At the Starbucks, a fairly attractive guy of about 22 was manning the cash register. He had thinning curly hair that was pulled back into a tiny little pony tail. He was so pleasant and so accommodating that it felt like he was playing the role of someone who is pleasant and accommodating. He would have seemed sarcastic, but you could see in his eyes that he was sincere. He also had these little affected hand gestures he did. When he asked Fred if he would like a "traditional espresso macchiato," he looked like he pantomiming forming a little ball of clay before our eyes for just a second. When we'd paid and we were moving to the coffee pick up area, Fred turned to me and said, "What was that?"

We made it through the security area fairly quickly. I got picked to go through a new machine they have called the Entryscan. It blasts air on you and then analyzes the air to see if you've been around explosives. It's awful. (By the way, I am officially explosive-free, so I'm fine for parties and other occasions both formal and informal.) Fortunately, we'd checked three bags, so we didn't have any trouble with security. Going to Ohio, I had a big pair of scissors taken away from me at Schipol (woops) and my pocket knife taken away from me in Detroit. Actually, they let me put the knife in an old bubblewrap envelope and I checked it, but it never came through the belt in Cincinnati, so it was gone.

At the gate, we sat and waited and then we sat some more. After about an hour, they started boarding us. Right after they took our tickets and we were headed into the gangway, everyone started coming off the plane saying that someone said the plane was "broken." Nothing more specific than that, just broken - like a child's toy. An older woman was complaining about being made to disembark, but I thought, I don't want to be on a broken plane. I was totally cool with not getting on anything broken.

After a few minutes, they announced that the flight was canceled and that we should all line up so that they could move us to other flights. And most of the people going to Detroit were right in front. Wouldn't it have been nice to let people with connecting flights go first? Whatever. It took them forever to do each person and the line was really long. To make the situation even more annoying, there was a lonely young Black girl headed back to college in front of us who was on the phone talking in her loud American voice the whole time. It went something like this, "Yeah? Then what did he say?...Seriously?...What was he wearing?...Girl stop..." It was just that keep me company or I'll be alone with the thoughts in my head sort of chatter.

I decided that I was going to call Patty and tell her what was going on. As I was headed to the payphone (they still have them), I heard an announcement over the PA. "Would Andrew Baker please come to gate A 13. You have a message. Andrew Baker." Fred and I both thought, Yeah! They're going to give us the special treatment we deserve and move us to the front of the line! (This is a thought we think throughout the day most days.) Turns out that there was a small package for me at the check-in counter at Terminal 3.

When I got to the counter, the young woman who'd helped us - Kristen - said, "The strap off one of your bags must of broken and your knife fell out. We didn't find the strap, but someone put your knife in an envelope." She handed it back to me. That's not how it happened, but I just smiled and said thank you. Fred bought it for me in Switzerland. It's a Swiss army knife - more a nail file and tiny scissor than a real knife. It's a replacement for the one I'd bought myself in Switzerland but was taken away from me in Florida. I can fly all over the world with that thing in my pocket, but get into the US and it's taken away every time. I'm usually more concious of it, but I forgot. It's so tiny. It would be a lot of trouble to try to kill someone with that blade - I'm assuming.

Then Kristen said, "How's it going up there? I heard your flight was canceled." I told her the line was going really slowly. "Would you like me to try to rebook your flights?" Could you? She said the next flight was going through Paris at 7:30 that evening. Or we could get the same flight the next day going through Detroit. I decided I needed to ask Fred's opinion. If my cell phone worked in the states and if I'd brought it and if Fred's cell phone had been charged and on, that might have been done with a phone call. Instead, I had to go through security again.

When I got back to Fred, he was still in line. Our little friend was off the phone and stared at us while we talked. Fred agreed that we should take the flight through Paris and suggested that I go back and have Kristen help me. So I did. And I went back through security again to get back to him. By the time I got back to the gate again, he was standing in the hall waiting for me. Apparently, the woman doing the rebooking at the gate had suddenly looked at her watch and said, "I have to get back to my post." So the whole line merged and then moved to another desk. Then that woman said, "I have to get back to my post" and they were abandonned. Fred said, "Don't ever talk to me about Dutch service ever again." I won't until we're faced with crap service again. That should be about ten minutes.

So I called Patty and she said she'd come get us. Fred thought it would be a terrible inconvenience for her come get us, take us back to their house and then take us back to the airport. Maybe, but she didn't seem to mind. They drive in Cincinnati - a lot. I don't think they think about it like we non-drivers do. At any rate, I jump at any chance to spend a little more time with Patty, so I liked it. Plus, I had left my ipod at her house (Can. You. Imagine?) so it was a great opportunity for me to reunite with my constant companion.

While we were waiting for Patty, we went by Starbucks again and saw our little friend again. He seemed to have no memory of our being there before. He just proceded to take our order and smile at us like he was sitting on a little cloud of bliss. I've known guys like that. He's the type that's going to be 40 and single and sort of hippy-granola and will always have a smile on his face while he works in a job where that constant smile is an assett. (Read: cashier at Starbucks) Oh well. At least he's happy. (And he had such lovely skin. Twenty-two. Been there - done that.)

After a short stay at their house, we went to a restaurant and ate sushi and then went back to the airport where I went through security for the fourth time that day, which you'd think would arrouse suspicion, but it didn't. Anyone curious about how that little nail file of a pocket knife got through security three times should be assured that a cavity search would have gleaned nothing. I was not that desperate. But once when I was going through security in Dallas, the security guy said that I shouldn't bother taking off my belt. "Just cover the buckle with your fist," he said. Apparently, that much flesh and bone is enough to keep the metal detectors from going off. So do the math.

Thank goodness I had the ipod back. The Delta plane we were on didn't have individual screens like the Northwest planes do. I knit for a while and then fell asleep (with a little help). I woke up four hours later when they were serving breakfast. 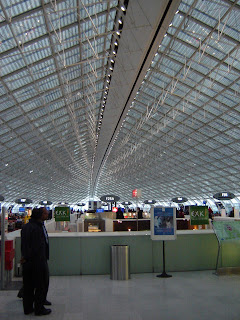 Charles de Gaulle in Paris is a pretty airport, but it wasn't that efficient or clear in terms of where to go. Crap signage. At any rate, we hung out in the gold card lounge for a while (love that Fred and his gold card) and then got on our flight to Amsterdam. So I've been to Paris again, but it looked almost the same as the view I get of Detroit every year.

Back in Amsterdam, our bags did not arrive with us. They were left in Paris. Well, mine were. Fred's were not accounted for. He was making an inventory of his luggage (with reciepts) immediately - and mourning the loss of that favorite sweater. I said, "Dude, I got my pocket knife back. You'll get your luggage. Don't worry."

Back at the house, I sang a different tune. My computer, all of my cables (including the charging cable for my ipod) and a lot of other crap was in my suitcase. Years ago, my friend, Maria, said I should get a computer. I said, "What would I do with a computer?" Ten years later, I sat in the apartment thinking, Is it really possible that I spent entire evenings not checking my email or Googling answers to questions? I also wondered if it was possible that we could leave Patty's house at 9:30 on Sunday morning and arrive in Amsterdam at 5:30 on Monday evening. What a trip. Will I do it again next year? Of course!

Our bags arrived on Tuesday afternoon at 15:30. Tuesday was completely strange. The no computer thing really threw me. I hope I never have to deal with that again. I like being in contact, checking my email, blogging, etc. It's important to me. Fred - not so much.

And then the week started and went like any other week. It's nice to be home.
Posted by Andy Baker at 8:26 AM