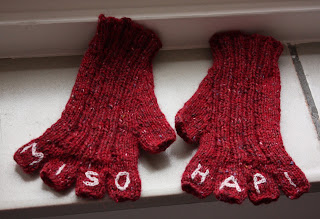 My glove obligation for my three nephews and my niece is finished. "Obligation" sounds like it was a lot of trouble. It wasn't. I like knitting gloves. Done on the magic loop, they fly along. And there are a lot of little modifications you can do to them to make them interesting.

This last pair is for Jonathan. The fingers read "MISO HAPI," which - translated - means "I am so happy." Kathy came up with it after looking at some ideas that were linked to from the Knucks pattern on Knitty. Apparently, he's a happy little kid. They are the medium, or woman's size. I think I'm knitting them a little tighter or something, but the small pair were really small - too small.

I also ribbed the back of the hand, which was mostly because I wanted to see it done, but also because it might be a little snugger when his hands are small and it'll stretch - like rib does - as they grow - assuming he grows. Maybe he'll stay nine forever. Wouldn't that be great, Kathy? 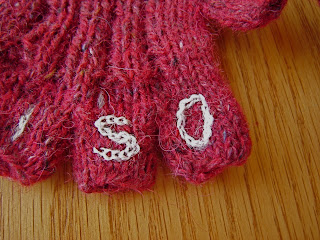 The letters were done with the chain stitch, which I steered away from with the other three pair. Actual embroidery thread helped. That O is no my proudest moment. 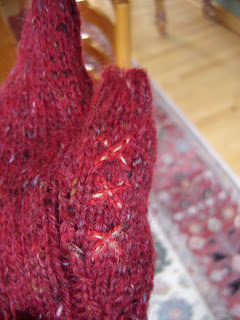 And then I put the X's on with red thread, which made them sort of invisible on the red gloves, but he won't care. I was sort of out of options.

Me doing that red-on-red thing is sort of ironic. I'm the type that will go on for half an hour when - usually at some gay event - someone who wants to use all of the colors in the box makes a sign using one color for ever letter. So the end product looks like EQU L RIGHTS OW! because the yellow doesn't show us against the white.* Just look around at your next gay rights rally. And if you don't go to gay rights rallies normally, this will give you a reason to go!

So my point is - please just give the gays all our rights so that this horrible signage will stop! Of course there's always the gay pride rallies. Never mind. Just give us all our rights because it's the right thing to do.

The package is on its way - or is there and Kathy hasn't told me yet. And I'm off gloves for a bit. I've got a couple of pair promised, but I really need a short break. On a side note, Alyssa left her gloves on the bus and her mother took them away for a bit - after she found them. Sweet that she's so protective of them.

*Here's how to avoid the yellow on white problem: Outline the yellow letter in black. The diversity symbolization is still there, but now people can read it.
Posted by Andy Baker at 6:00 PM

Are the 3 X's a reference to the arms of Amsterdam - like on all the amsterdametjes?

those are awesome gloves! I love the subtle red X's, it's like a little secret. :)

I just checked the mail and the gloves have not arrived yet. It is very cold here (for Texas anyway) and both the boys are very anxious to get their gloves. I just love them! I love everything about them. And yes, I am very protective of them. You made them and that is very special! Love you!Kath

OK- I promise that the gloves are in the mail in the morning. Bill is taking them to work, to save me the trauma of the post office (which I can only get to on Mondays anyway). They should make it in plenty of time for Christmas!