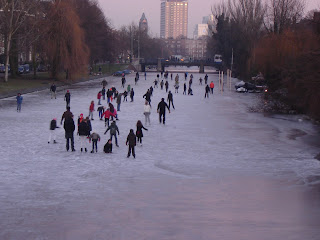 Coming home from work today, I rode by a canal (Do these canals have names?) and I saw people skating. I rushed home and got the camera because it was such a great convergence between my post yesterday, a message I got from an online friend and what I was seeing.

Doris, from Austria, lived here several years ago and still has feelings for Amsterdam. Yesterday's post prompted her to write this:

"I once (winter of 1996/97) walked in the grachten from one place to another in Amsterdam, under the bridges (I didn’t have my skates with me). It was very romantic (although we were three people & the other two in love! ) and one of my most beautiful, most treasured memories. Even then, it felt like a magic afternoon where time seemed to stand still - but all the same I cannot even think of describing how frightened I was. There was water on the sides of the canal! And people (with children) all over who didn’t seem to notice and/or care. I even thought: If this should be my last day, it’s a perfect one… But I guess that this year the temperatures are much lower than they were back then.

So, it can take a long time until canals are frozen again -maybe you should, you know… just a tiny little step..think about it!"

So having written that, look at this. 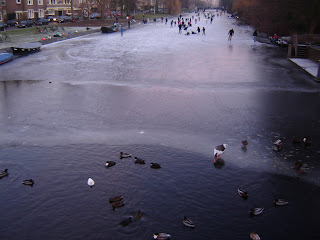 That's water. The ice has melted (or never froze) and there are water fowl in the canal. And while I was standing there, people were skating right up to the edge - well, within a few meters. It's just like she wrote. There's water around the edges, but people just pile out there. 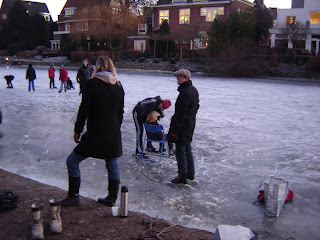 I wasn't standing there for long before a kid fell on his head and was rushed to his mother - though no one was really panicking or freaked out. He was just glided back in the chair he was holding on to - the same one he's sitting on in the picture. There was even a guy with his foot in a cast walking with a walker who, with the help of his friends, climbed out on the ice and went strolling down the canal.

Standing there taking pictures and watching people speed or stumble by made me smile. It's such a crazily romantic thing, this iced over canals. It didn't even occur to me to walk out there and stand on the ice in the middle of the canal.

But Doris is right. This doesn't happen every year. It might be a while before I have the chance to do it again. So I'm going to see if Fred will go to the canal with me tomorrow and take a little stroll. I've done so many things in my life that are scary and dangerous. The danger here is almost nil. And the scary part is sort of exhilarating.

So thanks for the suggestion/dare, Doris. I think I might just take you up on it.
Posted by Andy Baker at 6:00 PM

You just make sure you get Fred to take a photograph of that. I went on the ice on New Year's Day, had to go back to the UK on the 4th, and am jealous of all you who can go skating. I'm enjoying all the wintery photos from Holland.

You know, you really were a lot on my mind today... :-) I am wondering, I'm curious and of course hoping that you are still "whole" and healthy - whatever you've eventually decided or felt.
Doris