Dancing on a Friday Night 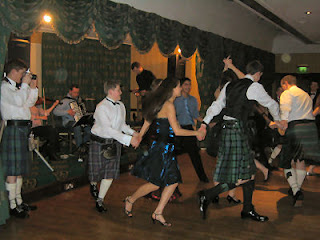 Last night, Fred and I went to a Ceilidh (pronounced kay-lee). My church, The English Reformed Church has Scottish roots and the congregants are, therefore, subjected to...I mean treated to Scottish stuff like the occasional evening of dance!

This particular ceilidh was a benefit for a homeless organization called De Regenboog. It means "The Rainbow" and it's the non-profit that took over the volunteer place where I worked when I first arrived - De Kloof.

When these Ceilidh's come up, I usually beg out with that dependable old favorite, "When is it? Oh! I think Fred and I have something planned that night." However, this time around, I thought Fred had something to do that didn't include me and so I gave it some consideration. Then my pal, Alastair, said, "Think of the blog entry..." and I was sold.

The photo above is unfortunately, not mine. I borrowed it from another blog. I forgot my camera and the only other camera didn't have anything great. We only had two kilt wearers in attendance last night. I would have gladly worn a kilt if I had one in my wardrobe, but, alas, I am kiltless. Alastair was one of the kilt wearers, as was another Scottish fellow. The rest of us wore trousers.

My father said that my crazy cousin Larry bought a kilt years ago. He supposedly spent way too much on it. He might have even found the Baker tartan, although every time I look, all I find is a horse blanket made with the Baker tartan. Really? A horse blanket? My father thought Larry buying a kilt was ridiculous. Where are you going to wear a way-too-expensive kilt in Texas? However, my Aunt Mary gave me a "Pedigree Chart" that says we have an ancestor named Dr. Alexander Morrison (born in Skinindin Skye, Scotalnd in 1717). So maybe that would give me a little cred if I decided to wear a kilt - the fact that I've got a pedigree, like an expensive dog. (How many animal references can I cram into one post?)

Our evening of dance began with Fred and me walking in late and watching the rest of the participants learn a dance. After it was over, we were recruited to dance. There were more women than men; there usually are at these things - unless you're in a gay group.

They always start in one of two positions: people standing across from each other in lines - men on one side and women on the other or everyone standing in a big circle, usually - but not always - in couples. It's basic folk dancing, but with a Scottish twist, like live music - a band consisting of a violin player who lives here and an accordian player they shipped in from the UK.

There was one dance that involved a lot of arm turns in a fairly complex pattern. It was pretty brilliant. I really enjoyed the dance on the whole. It was really great when the group consisted mostly of people who had some idea of what was going on - and sort of not great when I was standing next to the crazy old Dutch guy. And at the end, we stood in a circle and sang Auld Lang Syne. It was nice. I've only ever sang that on New Year's Eve.

Fred and I finally danced together the last dance. He was a mench and danced the woman's part, which I was totally prepared to do. It was the all-arm-turn-all-the time dance. Basically, I had to arm turn every woman while he was arm turning all the men and in between each one we'd arm turn each other. It became a competition with us trying to throw each other into the wall of people every time we did an arm turn. But nobody got hurt.

I kept telling people in the days leading up to last night that Fred wouldn't dance. He just doesn't seem the type. I've known him for six years and I've seen no evidence that he is capable of or willing to dance or sing. However, he proved me wrong last night. Good for Fred. It was nice to see another side of him. The next time one of these ceilidh's comes along, I'll be a little more agreeable about going - and I'll show up on time.
Posted by Andy Baker at 6:06 PM

Sounds like you were dancing a 'Strip The Willow'. Its a favourite amongst us Scots but beware of 'chinese burn' type soreness on your arms from over enthusiastic (e.g drunk) spinning partners, haha.

Yes, it was a Strip the Willow. We danced it twice - the one where Andy and Fred danced together was the Orcadian version.

It looks as though the Baker tartan may be produced by a mill in Vancouver, BC, but it's possible it may not be produced except by special order. On the other hand, there aren't any real rules that you can't wear one other than for your surname. Try looking up the New York City tartan - very attractive.

When your surname doesn't have a proper tartan, go here to design your one of your own. http://www.houseoftartan.co.uk/interactive/weaver/index.html

About a week ago I wrote a comment here about how good it is to leave your comfort zone once in a while. Now I am extremely self-conscious when it comes to dancing, I try to avoid it at any costs. Yet this post is so full of life and fun, the picture so cheerful; maybe I should just go for it (like Fred)...

Now I come to think about it, if you're descended from a Morrison, then you can wear that tartan - http://usamorrisons.com/images/MorrisonAncient.jpg

My gran was originally a Morrison, and I've always rather liked their tartan.