The Most Important Person in America 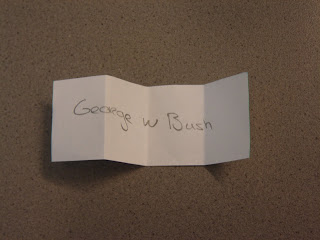 A couple of years ago, I got my first teaching job at a high school in The Hague. I had kids who were basically high school sophomores, juniors and seniors. And I had a group of kids who were in a double language stream - the IB program. They took some really in-depth English classes and they had several other courses (art, history, biology) that were taught in English (by non-native speakers). They were about sixteen years old and were - by far - the brightest kids I had. They were way smarter and nicer than the regular kids. They weren't always well behaved, but they were generally pretty good, and their English was on its way to being pretty amazing.

I decided to play Celebrity as a little getting-to-know-you thing on the first day. (Something I would have never done with any of my other classes.) I had them write down names of well-known people - Dutch and non-Dutch. We threw the names in bowl and we were off to the races. Early in the game, a girl picked a name out of the bowl. I was standing beside her, so could see who it was. She said, "He is the most important person in America."

I stepped forward and said, "Stop!" Someone had already guessed the right answer (George W. Bush), but I couldn't let that one pass. I explained that the idea of America is that no one is more important than anyone else. "All men are created equal" and all that.

"And," I continued, "if anyone is less equal than someone else, it is that man. I'll give you the point, but please, don't anyone ever make that mistake ever again." And they never did.

If someone were to say the same thing about Barack Obama, I would probably step forward then as well and make the point that in the US we don't (officially) think like that, but I would do it as a matter of course, because it's what I believe.

Yesterday was Mr. Bush's last official speech as president. (What a jackass.) And Tuesday is the big day. Yes, Bush and his staff will be out and that is great news, but more importantly, Obama will be in the driver's seat, and I'm sort of picturing him in the seat of a bulldozer, ready start cleaning things up.

There are gatherings here, but I think I'll just watch the coverage of the inauguration live at home and record the rest to watch after choir rehearsal. I almost bought tickets to a party, but I'd rather just sit here and knit while the new era begins.
Posted by Andy Baker at 5:49 PM

I have to say - I was just over at Mom's doing some cleaning and "they" were watching some show completely bashing Obama. It was interesting to me how they were just filling the viewers with all kinds of crap. Yes, it is interesting times ahead. I hope Barack proves everyone wrong, I really do. Love to you, Kath

I'm not even quite sure how I ended up here, but I'm totally bookmarking you.

Have a good day.