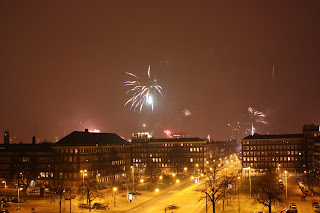 It always surprises me how long the fireworks go on on New Years Eve here in Amsterdam - and I'm sure all over The Netherlands (and other countries.) Last night, we watched about twenty minutes worth of fireworks before going back to the movie. And yet...they continued until about 1:00 - and after. I can't imagine trying to sleep through it. It's sort of wonderful the way everyone starts setting them off around midnight and they manage to keep going for so long. (There are some going off in the distance now.) And they came in waves. You think it's over and they're just reloading. There were people on the terrace next to our balcony pointing and looking around and taking pictures. 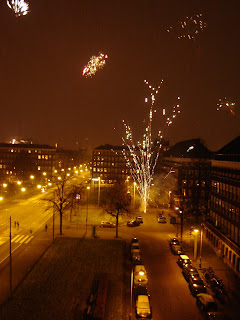 Good pictures of fireworks are terribly hard to take. (And these aren't really great, in my book.) The camera I was using wanted a second or two to focus in and get the right light. Fireworks only last a second or two. Do the math. Fred had a little more luck, but then the battery died.

We finished Harry Potter 5, but when it was over I said, "I have no idea what that was about or what happened."

Fred said, "You were asleep for a lot of it."

"Yeah. I'd kind of put that together," I replied. So now I can watch it again and it will be like seeing a new movie. I read the first four books, so the corresponding movies were easy to follow. I have no idea what happens in the fifth, sixth or seventh. Don't tell me. I'm sort of in between "I don't want to know" and "I don't care."

Standing at the window watching the spectacle that is Amsterdam on New Years Eve, I thought of my sister, Kathy, and her kids. I thought about how much fun it would be for them to be here and experience it all. They'd enjoy it. Like the lines of people at the oliebol stands and all of the other cute as sh*t stuff there is to see here around the holidays. It's so exotic. Oh - excuse me for yawning.

However, Fred and I have already decided that we're going to be in Florida next year . We went to Naples two years ago and I remember it so fondly. Naples is sort of a big retirement community with a lot of shopping malls, but I have the best memories of it. Getting up early and heading across the resort to the coffee shop wearing flip flops (...and other appropriate clothing), going to the beach and reading, and doing little else. After we realized that getting on a highway was like getting into a time vacuum where we lost three hours at a stretch doing nothing, we didn't go farther than the nearest strip mall - and we were happy happy happy. We watched a marathon of America's Next Top Model and slept when we felt like it. It was a great vacation.

Today, we woke up at about noon and cleaned up a little from our really wonderful meal last night and then we've sort of sat around. We haven't been outside. I don't really have any urge. I mostly want to knit and watch another movie.

And Fred is all about the subtle. 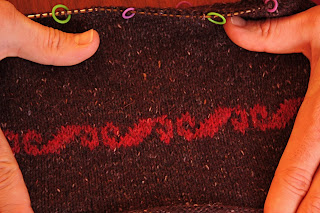 Oh, all you really need to know about Harry Potter is that Voldemort is trying to kill him and there's extreme danger at every turn, with plenty of teenage angst thrown in at this stage in the series for good measure. Sorry if that ruined it for you. ;-)

Lovely color work Andy! I like the red on brown. Tell Fred for me.

The lines for oliebollen in Haarlem were so long that we just didn't bother in the end. It was kind of sad that night not to have any, but who wants to stand in line in -4C weather for doughnuts?