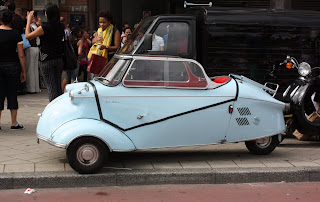 "Just think about it deeply. Then forget it.
And an idea will jump up in your face."
- Don Draper on Mad Men

I have been obsessed with Mad Men for a couple of weeks. I'm enjoying it and at this moment, I have watched everything up to Season 2, Episode 8. Episode 9 is downloading now, but it's really slow. I've decided to not watch more than one a day. There's only four left. I want them to last.

The quote right below the photo struck me and I stopped the player so that I could write it down exactly as he said it. I've said it (or something like it) for years. Like if I can't remember someone's name or what a vegetable is called in Dutch, I think about it and then I stop and try to forget about it. And nine times out of ten, the answer pops up in my mind. I think it's that resistance that keeps me from remembering it. Some people just push and think about it and they look like they're going to give themselves a hemorrhoid. Just relax and let it happen. Trust that you'll remember it.

Of course I didn't come up with the idea. I heard it years ago, but it's so woven into how I think that I just think of it as mine. I was reading something recently and they quoted Ralph Waldo Emerson: "In every work of genius we recognize our own rejected thoughts; they come back to us with a certain alienated majesty." The quote above doesn't exactly apply, but having quoted Emerson, it makes it look like I read Emerson, and I like that.

My other obsession lately is Facebook. The floodgates opened and people keep joining and friending. (I now have 133 friends.) This has made me think of two things: 1) Classmates.com and Reunion.com had better rethink their strategy. They have nothing on Facebook, and 2) I have to keep telling people that I moved to Amsterdam.

My reason for moving to Amsterdam is simple: it was Fred (and I was fascinated by the idea of living in Europe.) But it's difficult for me to express to people I haven't seen in ten or twenty years what it is I like about living here. Sure it's Europe, but I think on a daily basis my life here is sort of like living anywhere. I could be in Fort Worth, Cincinnati, New York City or Amsterdam, but I still have to eat, shop, work and sleep.

I like having a nice backdrop to my life. I like riding by canals on the way to church. I like having my bike be my main means of transportation. I like that so many things are new all the time. I see things here on a regular basis that I would have never seen if I would have stayed in the states. I like expats - generally.

I also like that some things are not available, or not readily available. For instance, I would love to make chocolate chip cookies, but you can't find all the ingredients easily (help me out of your local and know the secret). So I like that there's this little challenge if I want to do it, but I like that it's a challenge on a not-so-important thing and that it's surmountable. If my life were really easy, I'd...never mind, I'm not sure I can imagine that. My life is really wonderful and part of that is the challenges. So I have chosen a profession (teaching) that's loaded with challenges.

The other day, a student of mine said, "When you talk, you say a lot of things tussen haakjes." Tussen haakjes means 'in brackets' or 'in parentheses.' I smiled and I said, "That's funny. I write like that too."
Posted by Andy Baker at 1:34 PM

I don't know whether you'll appreciate this or find it a time sink, but here is Basket of Kisses, the Mad Men fan blog.

It's a time sink AND I appreciate it. Thanks, Steph

I've recently become a Facebook freak as well. That website is a time-sucker! I tell myself I'm just going to pop on for 5 minutes to check my messages and next thing I know it's 2 hours later!

Do I need to send you the ingredients for good chocolate chip cookies? I will! You need a good cookie now and then! I love you! Kath

You can find everything you need to make chocolate chip cookies at the "deli" on the Leidsestraat between Leidseplein and the first of the grachten. They have everything, but 3 times the price you'd really like to pay. I only go there before Christmas to make those American things you can live without at that time of year.

I had the same idea, Alex. The shop is called Eichholtz, and is at Leidsestraat 48.

It might be cheaper for Kath to send the stuff from the US! Or else cultivate a friendship with someone who's flying there for a holiday and get them to bring the required ingredients back.

Would Dutch chocolate really not work though? I think it's worth a try, and I could come round and help decide if it was a success or not...

Here you find EVERYTHING for making cakes and cookies, also chocolate callets (whats in a name?) for your chocochip cookies.

For chocolate chip cookies baking soda is the item that is REALLY difficult to find. Eichholtz is the only local source I've found. You can get nestle chocolate chips there too but it's nicer to get local ones at one of the chocolate shops. For other recipes...you can find baking powder at the natuurwinkel. Good luck!