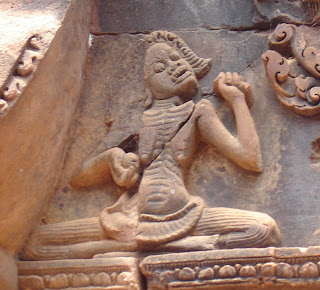 This is a picture of a sculpture of Vishnu's wife - taken in Cambodia. Apparently, when he was dying, he made her into an ugly old woman with "long breasts" (in the words of our tour guide) so that no other man would want her. Rumor has it that up to the last minute she was sort of hoping for the whole "Re-marry. I want you to be happy" speech. Oh well. Husbands are unpredictable - especially when they're Hindu gods.

My mother is in the hospital. When I was thinking of a photo to put up with this post to illustrate that, this photo came to mind. It's not that she looks like this, but I've seen her ill and she probably feels like it - and she wears that feeling on her face.

It's "just" a surgery she needed to have - a female surgery that I've already heard enough about. I say just because it's not like she was in an accident - thank God. My wonderful sister, Kathy, is dealing with everything, and she's having to deal with a little drama because our brother is a bit of a sissy about the whole situation and he's not being much help. And she's dealing with our father's (third) wife who feels the need to act like a friend to my mother - his first wife. (Sounds like it could work - and it could in an after-school special.) I would say that it sort of sucks to be here - and not there - if there was any chance that I really meant it. There's not.

Everyone down there speaks the same language, makes the same assumptions, and has the same social habits. I have a different way of being. I can't stand all fakeness and ignoring elephants in the room. Kathy's dealing with the situation and the family and how private my mother is. We talk on the phone a lot. I'll support her like that - listen to her when she needs to blow off steam.

Kathy's already told me several stories that range from angering to disgusting to typical Mom. I hope she writes them down. My mother will be out of the hospital in a day or two. She is amazingly stoic and doesn't complain about anything, which can be sort of dangerous. She'll be at home recuperating for a couple of weeks. She's restless and bores easily. I hope she finds a hobby.

So, as Maya Angelou once said (and I'm paraphrasing), If you're inclined to pray, pray for my mother. If you don't pray, just send her a good thought.
Posted by Andy Baker at 6:30 PM

Having been in your mother's situation (I'm pretty sure), I send her buckets full of good thoughts. And you too Andy.
Alex

I can totally relate to everything you wrote. I often find myself in different situations with complete strangers called my family, only to find out that I really love them. And when I need they are always here. Sometimes I get so angry about someone not having a clue how I think and who I am, and when I catch myself crying I have to admit I do care. So I can understand you're torn between wanting to be with her and relief you're not there. But this is about your mother. I really hope she wil recover from surgery and get well.