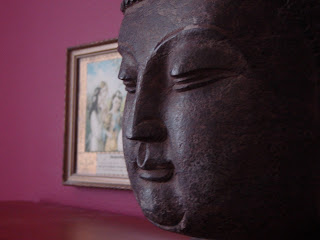 What sucks worse than Dutch television? Few things:
So much stuff has happened on American television since I moved here almost five years ago. America's Next Top Model started in May of 2003 (according to my friend, Wikipedia). Project Runway started in December of 2004. And then there's "real" shows like Pushing Daisies and Mad Men. We get some shows here. I got to know Family Guy and South Park after moving here. And there are shows like Reaper and Dead Like Me (which both, oddly, have to do with death or dead people) that show up on Comedy Central. And we get all the CSI's and the Law and Orders, but they come on with a really irregular schedule. I can never keep track. It's not like in the US where they have a whole Thursday night line up you can depend on. Remember Must See TV? Brings a tear to my eye just to think about it.

Yes, if you're not into listening to Dutch people talk in Dutch about Dutch things, Dutch TV is pretty much crap. And Comedy Central is really stuck on Californication and That Seventies Show and a stupid show featuring third rate comics. (My apologies to any third rate comics featured on Comedy Central who might read this blog.)

So I was talking to some knitting friends on Monday night. I said that a student of mine (who will remain nameless to protect his...well, he's not exactly innocent) had sent me a link to a website where I could get American TV shows online. The problem was that most of the links turned out to be dead. So two women offered to send me links to websites that they used. One of them is oh-my-God-I've-never-seen-a-website-so-slow, but I just got finished watching my first episode of Mad Men - until it suddenly stopped six minutes before the end. There was an explanation in Chinese, but I didn't take the time to send it through the translator.

Before she moved away, my friend, Deborah, gave me a little talk about how it wasn't that bad to watch movies online. The other day I watched the first third of The Curious Case of Benjamin Button online (it was the only link that worked!) with the sound track off by eight seconds and believe me, it is that bad. But Deborah was talking about morally and ethically bad. She was preaching against all those ads you see before movies: "You wouldn't steal a purse. You wouldn't steal a car. Etc."

"Who's really losing money?" She asked.

Thing is, I would pay if I could actually get them online. I'm not particularly interested in buying the box set for fifty euros, but I would pay a bit to get it online. But I can't. It's not available - and it should be. A lot of stuff (CSI, SNL, and even shows that are not abbreviated with three letters) is not available to me because I live in the wrong region - read: outside the US. So I'm about to wade into the swamp of watching TV online.

Yeah, it's morally mushy, but it's not like I'm downloading it and then selling it. It's not drugs or human trafficking. It's something to watch while I knit. And the other people that I've talked to who are doing are so nice.

I don't get internet regionalism. You'd think they could do region-specific ads for the streaming programs, since that appears to be the primary reason for restricting access.

I've been doing a bit of online viewing, but primarily through Netflix, which is US-only and subscription-based.

You get BBC right? Us Brits do have a few addictive shows at the moment.. Masterchef!).I use 'BBC i-player' for shows I've missed. Most of my viewing is U.S tv though..favourite being Cold Case.

It does suck..I have Apple TV with a US account so I can download all of my favorite shows the day after it airs in the US..You should get one, but you need a US-based account for iTunes...