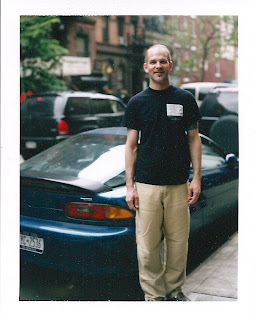 I was talking to a student today. Most of one of my teaching jobs entails activation - getting students to talk and use what they've been learning. Somehow, we got on the subject of getting old and needing some help doing things. She sort of insinuated that that is why people have kids.

When I was about fifteen years old, I was talking to my then-best friend, Alice, and we got on to the subject of having kids."Sure, I want to have kids," I said. "But if I don't, that'll be okay too."

Alice objected. "You have to have kids. Otherwise, who's going to take care of you when you're old?" (She now has four children.)

Even at fifteen, I thought that was a terrible reason to have kids. I talked to a woman years ago who said flat out that she and her husband had a kid in hopes of saving their marriage.( I just thought, Have you never seen an after school special?) And there was a couple on television years ago who had a kid so that they could get a bone marrow transplant for their daughter.

But even if the reason to have kids is not so that you have a ready made nursing staff when you need it, having kids improves your chances of having people around when you need them. However, it doesn't guarantee that. Even the aforementioned student told me that her father left when she was eight and she never bonded with him. If he needs help, she wishes him well in finding it.

I guess I'm having a little moment of "Oh crap! I'm 43 and I forgot to have kids." It's stupid because I've thought about it a lot for years and I don't think kids were ever really in the plan for me. Certainly not starting now. I mean, if called upon, I would step up to the plate. But I'm not going to be proactive about getting a kid, and I'm cool with how things are.

Growing up, I didn't really have a paradigm for being older and childless. People who didn't have kids were sort of sad and unfortunate. Something was wrong and they were missing out on an incredible thing. But having lived in NYC and now here, I've known people who are my age or older who don't have kids and they manage, and they have happy and fulfilling lives.

What I keep remembering is a scene in The Savages where the father has been living in a retirement community with a woman. And she dies and the woman's grown daughter calls the man's kids and says, "You need to come get him. He's not ours. He's yours." The kids haven't had any contact with him for years and they have to go get him and the movie continues from there. It's a good movie. I like Philip Seymore Hoffman and Laura Linney a lot. (Some people really hate her.)

So I started thinking about being old and being in Amsterdam and something happening to Fred and his nieces calling Kathy's kids and saying, "You need to come get him. He's not ours. He's yours."

It's a crappy, terrible feeling to think I could be that guy that has to be collected.

Fortunately, my parents are healthy. They're both in their early-seventies and are only showing the slightest signs of slowing down - or mellowing. Three of grandparents lived to 70, 76 and 76. So if I do the math, I've got a good thirty years to plan for being old and really thinking about it. I guess that's a reason to endear myself to someone's family, huh?

At this point, I think that if something (God forbid) were to happen to Fred years from now...I wouldn't want to be here old and alone. I think I'd move back to the states. But it's possible that with my every increasing facility with Dutch (I sigh), it wouldn't be a problem. We'll see. I have a while to practice.

The thing is that having kids doesn't guarantee that you won't end up alone in a nursing home. This same student was in nursing school years ago and she said a lot of people went to visit their parents once a year - if that. And money doesn't protect you. I know a woman with more money than she could ever use and she's alone in a nursing home most of the time. Her kids visit her regularly, but having kids and money didn't save her from depending on people she doesn't know to help her out of bed every day.

I guess I need to go eat a piece of fruit before I head out to writers group. I think preserving my health and making connections is probably the best thing to do for today.
Posted by Andy Baker at 4:38 PM

My mum is 52 and we have already chosen her nursing-home...it's a running joke between us. She wouldn't trust me to look after her anyway :)
Secondly, despite only being 10 yrs your junior I am available for adoption.

When I grew up I had this very traditional picture of myself at thirty - married, children, house,... Now I am 35 and have none of them and am happy. Or I would be if my mum stopped nagging me about being all alone in say 40 years (my mum is 64 and broke up with her boyfriend last year - he felt neglected because she was looking after her 96 year old mother) .
To cut things short: I can so identify with this post...

My kids would happily come scoop you up and bring you back to America to live. Or better yet, I would imagine one of them would move there just to be near you. They love you! :-)

You can't go back to the U.S.! If you and I end up here as old folks alone we should move in together and take care of each other. I'm sure our spouses would agree.

I just put Will on a plane. He should be there in a few hours, so just pick him up, have plenty of cereal available, and brush up on your math. I'm sure in 15 or 20 years he will be a great caregiver.

I'll be here too, we can just be little old expats knitting together -- what will change?