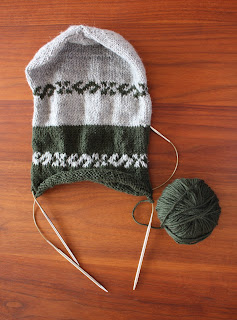 One September, after a long hot summer, I found myself in math class at Hurst Hills Elementary School looking at long division problems. The problems looked familiar, and I knew that I'd learned long division the year before, but I didn't have the foggiest idea how to begin solving them. After some private instruction, I got the basics and I figured it out. It is now firmly in my bag o' tricks and I use it regularly. (I know adults who can't do long division.)

I also have a really distinct memory regarding learning multiplication and my father. I had a set of flash cards with the problem on the front and the answer on the back. For some reason, my father was going through them with me. When we got to 8 x 8, I was stumped. I'd seen it before, but I couldn't remember the answer. He was called into the other room for a moment and I looked at the answer. When he returned, I said, "Is it 64?" Now every time I'm faced with multiplying eight times eight, I think of him and that moment. The lesson: cheating is, in fact, a way to learn. Not the first thing to go to, but it can help. For some reason, I was much better at multiplication than division. I can do some complex multiplication in my head. (Not under pressure.) Division is less automatic.

While making this Very Warm Hat (by Elizabeth Zimmerman) I decided to put a color work strip in the middle to spice it up a bit. The hat is 90 stitches around. Because I know my multiplication tables, I knew that I was looking for a pattern that was 5, 9, 10 or 15 (for example.)

Okay, it's not rocket science, but it's nice to have that stuff at hand. They don't tell you that when you're learning it - at 10-years-old. I'm not sure it would have helped motivate me, but they don't tell you.

There's a lot of other uses for math in knitting. I like that. I like that there are times when you have to do some cipherin', as Jethro Bodine might say. 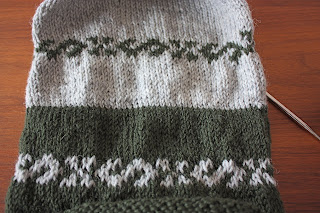 This hat is the third attempt at making myself a new winter hat. The first was too big, the second was too small. This one should fit. If it doesn't, think of the nice gift it will make. Here's the one that was too big. 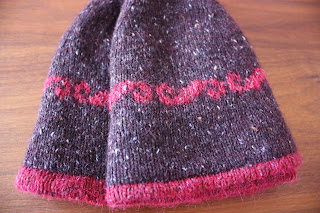 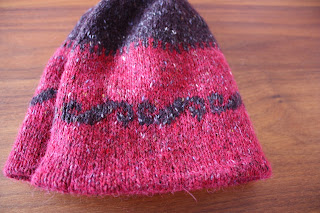 It's reversible. It's double thick - making it "very warm" as the name says. 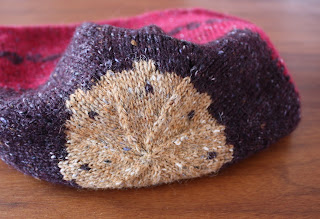 It allowed me to use up a lot of left overs, although Fred hates the little yellow Yakima. He's not very adventurous in hat color. It's the inside of the hat, so I'm fine with the yellow.

My plan is to felt it down to a wearable size. I have a big head and it's gigantic on me. If I had a reasonably big 'fro, I could wear it comfortably. I don't have enough hair for a 'fro. It would be a struggle for me to get a comb-over going. So when we have a felting party, this is coming with.
Posted by Andy Baker at 3:08 PM

I would be a little worried about the potential for the "headband" area to flare out when felted. One possibility would be to blow up a balloon to an appropriate size, stick it inside the hat, then run a non-felting thread through the bottom edge to pull it together and hold the balloon in place. This will help pull the edge in but keep the top of the hat from felting down as much relative to the edge. At least in theory.

I amazes me how you are able to slip a little "Texan" childhood in a very knitting blog. I love it. That's why I love reading your writing. It takes me back to a more simple time. By the way, is the bottom hat really purple and pink and are you really considering wearing it? I like the top one better. Just my opinion. Love you! Kath

The colors are brown and red. They look nice. It's the left over wool from your mittens and Jonathan's gloves. It was just the light.

I enjoy working with long division worksheets, too :)