I've Come to Fix the Sink 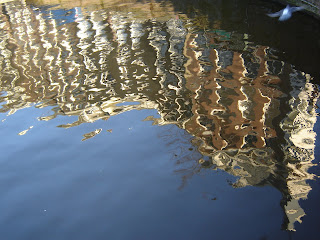 As a child, I used to see a cartoon on television wherein a plumber knocks on the door of a house and a parrot answers - hilarity ensues. It was one of my favorites. (It's linked there if you don't have a clue what I'm talking about - or if you just want a trip down memory lane.) I don't run into a whole lot of people here who would know what I was talking about if I said, "It's the plumber. He's come to fix the sink." Don't think that'll stop me from using that line.

This morning, Fred came into the room where I was sitting and said, "The sink is dripping." There had been water all over the floor, alerting Fred to the fact that something was up. We looked at it and fiddled around with it. The pipes are different here than I remember pipes being in the states. There's the same basic construction, but the pipes under our sink are plastic and have a very snap-together look to them. I don't know what they normally look like, so I had no clue how to put them right again. Fred suggested taking it apart and trying to put it back together. It's just a steady drip, I thought. Don't make it worse by trying to fix it.

I've never owned before. I've always rented. With renting, you have the assurance that if something breaks - as many things did over the years in that shoebox I rented in NYC - you can call someone and it's their responsibility to fix it. Sinks, ceilings, walls, windows - it's always theirs to pay for. Looking at the dripping pipe, I thought about the fact that I've never had to pay for a plumber - especially in Amsterdam.

Fred brought out a phone book and started looking through it. They all look the same. Full page ads announcing same day service and no cost to come out and just look at the problem. But I know that one service guy can be great and another can be a total jerk who is just trying to scam you. How do you know? I said, "Call Pita [a neighbor] and see if she knows a good plumber." If Pita didn't answer, I said he should knock on some doors in the building and see if any of the neighbors knew of a plumber. It's just such a crap shoot. It's like going to a random...anything...dentist, shoe repair guy, upholster.

Things like the plumber situation are not something I considered when I thought about living in a foreign country. I mean it wouldn't have been a deal breaker, but those things are part of the whole package. And to have to do those things in imperfect Dutch or with someone whose English is marginal is intimidating. But the beat goes on. I go to the post office, I get stopped by the police for not having my lights on, I do my shopping, and I get through it.

At the end of it all, Pita's plumber arrived and he looked at the pipe and said that it had just gotten moved out of place. He moved it back and it was over in a few minutes. Fred gave him €20. He said, "I felt like a silly old queen who doesn't know the first thing about plumbing."

And did Fred then smack you really hard? :-)

Fortunately, I was raised by DIYers, so I'm generally pretty handy, at least with basic stuff.

It cracks me up the things you remember and where exactly to find them. I completely forgot about The Electric Company until I clicked on that link. I remembered the cartoon, just not where it was from. I love that you are my memory from my childhood! K

What I would give to hear Fred say Silly Old Queen...