On the Power of Blocking 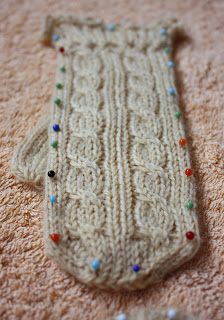 As a young knitter (I was a mere 38 when I re-entered the wild world of knitting), I poo-pooed blocking. It seemed like such a hassle. I never did cables or anything back then that wasn't basically a square, so I didn't see the point or the need to go to all that trouble. These days, I block fairly regularly and I find it really fascinating. This is a swatch I knit for the mittens I just finished. 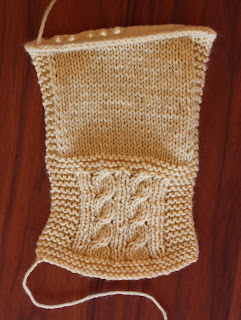 What's amazing about blocking this yarn is that while I was knitting the swatch, the yarn was a little stiff and it felt "crispy" and cheap, and it wouldn't lie flat. After blocking, the yarn is fuller, softer and is completely relaxed. It's also got a nice drape to it. This is just some superwash ONline Linie 144 Gala that's been in my stash for about five years. The name of the yarn means nothing to me, so if it means nothing to you, we're on the same page. My point is that blocking transformed this yarn. (Forgive me. I'm prone to the dramatic.) 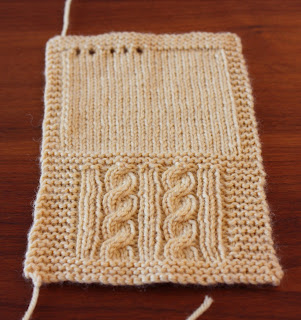 By the way, I blocked it by washing it in a little wool detergent and pinning it out. I always press it in a towel. I really doesn't take that long to dry. It sounds like it takes days, but it doesn't.

The finished mittens are smaller than I had planned, but they look nice; I finished them today. I used magic loop. Zip zap and both mittens are done within minutes of each other. I loves me some magic loop. Because the yarn is very plain and yellow, the mittens are very plain and yellow. I'm going to pimp them out a bit before calling them finished. I have an idea or two. They'll be for a girl, so I can embellish them a bit in a way that wouldn't work for...most men.

This pattern, by the way, is called Melina Mittens and it is by Malia Mathers. I'll write more about the pattern when I've finished the mittens.

Full disclosure: I'm currently avoiding a sweater and I keep finding one more little project. One more hat and I'll get back to the sweater. One more pair of gloves. I think this may be it - and maybe a second pair. But that's really it.
Posted by Andy Baker at 3:52 PM

I would argue that the blocking had nothing to do with changing the feel of the yarn. The washing did that. What the blocking did do was show off the cabling to better advantage.

I still prefer to block by wearing.

They turned out lovely. I am really happy to see more and more Melina Mittens around. They are so perfect for little girls! Thanks for making them.