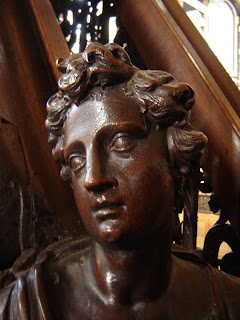 Back when I worked in a hospital and had a good union job, I would occasionally find myself looking like this. (See photo) I would call in "sick" because I just couldn't take going to work. Most of the time these days were planned. I knew that there was coverage and that I wouldn't be missed that much. And I knew that a day off would do me a world of good. I called them "mental health days," and while my clinical supervisor didn't agree that sick days should be used that way, I did. And since it was left up to me to decide what "sick" meant (sick...of working), her opinion didn't keep me from using them like that.

As I said, it was a union job. We had 20 vacation days, 8 national holidays, 12 sick days and 4 personal days. If you're about to do the math, I'll just tell you. That's 44 days off a year, not counting weekends. It was a good job in terms of vacation days. Yes, the work drove me crazy, but there was the relieve valve of time off that made it do-able. (Other than that how did you enjoy Dallas, Mrs. Kennedy?)

Work on Friday - as I wrote on Friday - took it out of me. The students were like a bunch of wild monkeys and due to a miscommunication, my already-long day was extended by an hour and a half, and I found out as I thought the day was over and I was putting my coat on.

I sat on the couch this morning and seriously considered calling in sick, planning out my day and deciding what I would do with a whole free day. When I had the perfect plan, I decided that I would go to work. That's just how my mind works. I don't work well with being guilted into anything. And in this case, it wouldn't have done much to try to impress on me that the students would miss something if I wasn't there. What I needed was the choice. If I know I have the choice, I'll generally do what I have to do. I just don't want to do something and feel like I have to do.

In the end, work was fine today. I decided to follow the path of least resistance and do what I needed to do without forcing things along. I have three groups of students. Young, not-so-young, and a little bit older. The young students were cooperative, the not-so-young students told me after the lesson that it was a really good lesson, and the students who are a little bit older said before class that they appreciate me and that they are glad I work there.

My mother is fond of saying, "My mother and dad would be so proud to know that you're a teacher." That makes me smile. They were teachers a long time ago in a land far far away - Texas.

It was such a relief today when I left work not feeling like I'd been put through the ringer. Yes, that's a very low bar, but for today, that was enough.
Posted by Andy Baker at 6:10 PM