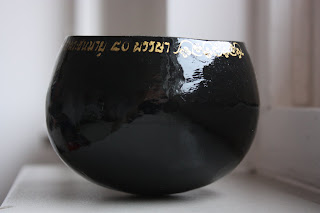 When Fred and I were in Bangkok last summer, he read a sidebar in the guide book that described a Monk Bowl Factory. He decided he wanted to see and we went in search of it. It's not that difficult to find things in Bangkok, but my experience is that you need to be careful of who you ask when you're looking for help.

We asked a woman for help one afternoon and it cost us hours because she wanted us to go somewhere else. It's a long difficult-to-tell story and we don't come out looking very good, so I'll skip that one. However, the story of the monk bowl is a success story and its' quick, so I'll put it in.

The walk to the neighborhood wasn't a problem. The problem was finding the actual "factory" where the monk bowls were made. It happened to be in an alleyway off an alleyway off a small street. We stood and talked to a guy for fifteen minutes until he finally understood what we were looking for and he took us there - and didn't ask for anything. Here's a shot of the first thing we saw. Does it inspire confidence or would it send you running? 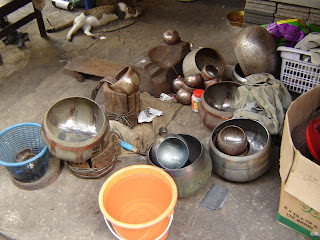 The "factory" was really little more than a garage with a couple of teenagers working the front. Neither spoke English. They fetched the owner pretty quickly. He was a shirtless older guy with a pony tail. He understood what we wanted. (They have one product.) And he showed us the display case where we chose two bowls. One was the one at the top of this post, which we kept and one was a dark, metallic green that we knew would be the perfect gift for our friend, Butch.

The process of making them is fascinating, but I won't go through the whole story. Another guy blogged about it which you can read about here. Basically, the bowls are made up of eight pieces. (And all of the employees can all count to eight, which each one proved to us.) I think eight might be symbolic of something. Here's one put together, but not pounded out into a round bowl. 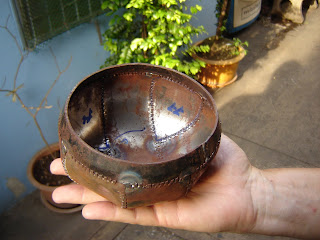 They were amazingly accomodating and took us through how the bowls are put together. The whole thing is done by hand and it's pretty amazing if you're into how things are put together, which I am. It's all sheet metal and hand tools. Here's a photo showing an old man in an alleyway and how they four little triangular pieces are attached. It's all about a hammer and pounding the metal until it submits. (Sort of like how some people rear children.) 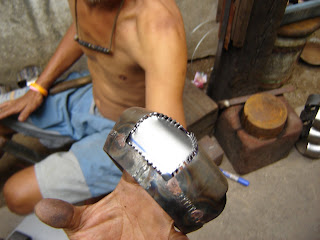 All of those little zippered in pieces are cut by hand. The alleyway was probably a meter wide and people were walking along it the whole time. I can't imagine doing that all day long. It was really primitive - and sort of dank and hot, hence the shirtlessness.

We bought two bowl. Fred instinctively tried to bid the owner down. (We bought small ones. They have several sizes.) Fred took off a couple hundred baht off the asking price and I said, "Dude, that's like a dollar. Just pay him."

The bowl is one of my favorite souvenirs from that trip because I saw what it came from and where it came from. The most amazing thing is that they're made from eight pieces, but they have a ring like a solid piece of metal. And apparently real monks actually use them. If you're ever in Bangkok, go look them up.

I have to say that I really enjoyed seeing the process with which these bowls were made. Seeing the actually bowl is just amazing when you see where it started from. Butch is very fortunate to have one of these. I LOVE my scarf though. Love you, K

The eight pieces most likely symbolize the Noble Eightfold Path to enlightenment.