I recently finished a couple of small projects. The first is the Ice Queen that I wrote about back in February of 2008. I was stopped in my tracks by the picot edging and I did it wrong and it was completely useless. As I didn't look forward to picking out the cast off of this Kid Silk Haze, I put it away until I thought I would have the patience to do it. There was also the cast off - and it's got 108 stitches on the last edge and then 156 stitches of a provisional cast on. And I knew that would drive me nuts. So I put it in a basket for a year.

It's a nice thing to have off my needles. It's one of those things that has been hanging over my head. I had a masters degree like that one time. I hated it. It was such a relief to finish that thing. Fred thinks this looks like a dead cat. Okay...it does from this point of view. It was an unfortunate choice of yarn. I had no idea it striped like that. I thought it would be more random and mixed. The good thing is that it makes sense on. I won't put a picture of me wearing it, but I'll try to get a snap of someone in it. (Fred can you come here for a second?) 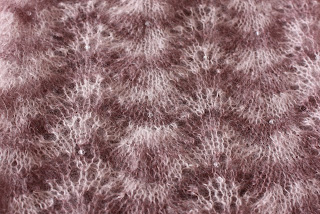 I enjoyed doing this because it required beads. They were fairly expensive. Swarovski crystals at some ridiculous price. The process of putting them on was a little fiddly. (It requires fishing line or a tiny crochet hook.) I'm glad I didn't do the other version. 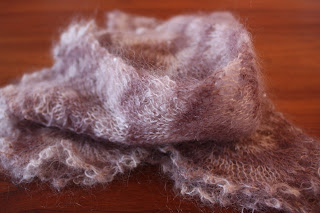 The scalloped edge is nice. Again, it looks good on. It's very soft. That mohair has a good look when it's done. I might do something else with this stuff later. I still have almost a full ball of it in a my stash. It's less mottled. 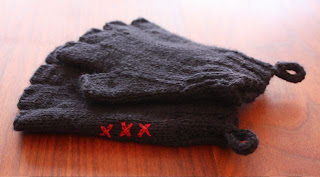 The second thing I finished but haven't written about is a pair of Knucks for my friend, Butch. I offered to make him a pair and he said he wanted black and that his hands were fairly small. These are apparently slightly too small. I'll make another pair in a bit. I didn't use felted tweed because they don't have it in black, unfortunately. (Or they don't carry it at De Afstap.) I used a Rowan wool-silk. They feel super nice. Glad I kept notes. Knucks is a really good pattern. I've made about ten pair of these. They're fairly quick, don't take a whole lot of yarn, and people like them 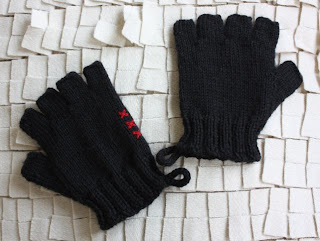 Fred took this picture. Sometimes I give him a little assignment and he does an amazing job. (He hates to hear me say "assignment.") It's really difficult to photograph black and make it look black and see the texture of the fabric, as you can see by the two pictures of the gloves that I took. He's very creative and good with the light. I work with fairly standard light and settings. 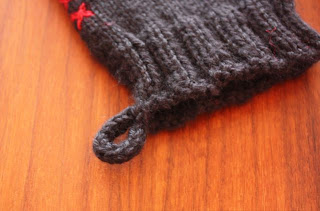 And this little loop is one of my favorite things. I am crazy about the i-cord. I try to work it into almost everything.

I'm fiddling around with knitting now. I'm not sure what I'm going to work on next. I'm doing a crochet hat in a green wool that's sort of left over and I'm doing a feather and fan scarf that I can take to knitting on Mondays. It's sort of mindless, so I can talk. I'm not really that interested in the scarf, but I wanted to use the Manos Silk Blend.

I'm winding my way back to the aran sweater. Slowly.
Posted by Andy Baker at 4:06 PM

So is that first thing a poncho? It is very pretty close up, but I need to see it on someone, anyone.
First dibs on those knucks that are too small for Butch.

Beautiful items and photography! Thank you for being honest about a project you didn't enjoy. I can totally relate.

I really like the look of the hat. It looks really soft, but I agree with Patty...I need to see it on someone head. So...