A Day Filled with Mokum 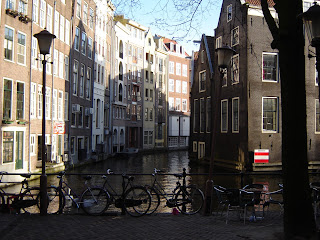 This afternoon, I had coffee with a former student. Then we walked around the Center for a bit talking and looking at things. Amazingly, he was able to show me a nitch or two that I hadn't seen before. (I'll save that for another post.) I love that in such a relatively small city, there are things I've never even heard of and places that I haven't been in years.

This evening, I went to a choir rehearsal. I'm helping out with a friend's choir that is short of men. I love singing. It's striking to me how different choir directors can be and how different the rehearsals can be. No value judgments, no snarky comments. They're just different.

There was beautiful light today. It was crisp and clear. Spring in any city is beautiful, but I think it's especially beautiful here.
Posted by Andy Baker at 10:39 PM

The mental image of you thinking of me in Amsterdam really makes me happy. And I hope that in a not too distant future you will write a blog entry like "My day was great, I had coffee with Doris!" I think it's time I returned to Amsterdam, be a real tourist there... You know, I have a CD in my car with songs just like that (I tend to listen to it only when no one can hear me sing along) and the other day I watched a "draaiorgel"-video on YouTube. I'm just "gek" like that.
Contrary to you I am not a city person so I find the size of A'dam perfect. And for such a small city it is very cosmopolitan- contrary to my place here in Austria. So thanks for making me all sentimental and nostalgic. And having "Fernweh". Guess I just started saving for a trip. :-)